A pandemic-hit US Open is set to take place in Flushing Meadows, New York on Monday, with Serena Williams’ chase for a record-equaling 24th Grand Slam title set to dominate the headlines through the women’s draw.

Concerns over safety ahead of the tournament have led to world No. 1 Ash Barty and No. 2 Simona Halep opting out of the prestigious tournament, leading some to suggest that Williams’ attempt to secure an historic title would somehow be easier, or less significant.

But Williams doesn’t see it that way, and told reporters ahead of the tournament that any suggestion of the title carrying an asterisk due to the current pandemic is missing the point.

“It still has to be tennis that’s played, asterisks or not. I think this whole year deserves an asterisk.”

Williams is chasing her first Grand Slam title since she gave birth to daughter Olympia in 2017. She’s reached four finals without claiming victory in the final. But, she is far from her peak form heading into the tournament, which gets underway Monday in New York.

Williams’ form since the five-month COVID-19 hiatus has been patchy, at best. She has gone 3-2, with all five matches going all three sets.

Usually, Williams blasts her way through the early rounds of tournaments, meaning she’s still fresh for the tougher tests of the later rounds. But with her form forcing her to battle back and forth through longer matches earlier in tournaments, she’s finding the increased physical demands hard to cope with.

“It’s hard to play the way I have been playing and to stay positive,” she said.

“And to play nine hours in a week is too much. I don’t usually play like that. It’s all new for me.”

Those struggles were there for all to see when she lost out to world No. 116 Shelby Rogers in the quarter-finals of the Top Seed Open, then was knocked out of the warm-up tournament for the US Open, the Western & Southern Open, in the third round by 13th seed Maria Sakkari.

“I don’t think that helps mentally when it’s like you know the match is over and you have won the match, and now your legs were tired and now they are even more tired, and now it’s even more tired,” explained an exhausted Williams.

“I put myself in a bad situation. It’s like dating a guy that you know sucks. That’s literally what I keep doing out here. It’s like I have to get rid of this guy. It makes no sense. It’s frustrating.” 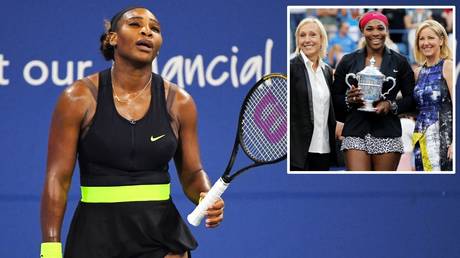