Organizers of the US Open are facing accusations of ‘discrimination’ after it was announced that only vaccinated fans will be permitted to attend the event – despite several of the sport’s top players continuing to avoid the jab.

This year’s iteration of one of the biggest tournaments on the tennis calendar is taking place without a host of the sport’s top stars after it was recently confirmed that the trio of Roger Federer, Rafael Nadal and Serena Williams – the winners of a combined 63 Grand Slam titles – will be absent due to injury.

But the event isn’t just shorn of some its biggest names, after it was confirmed recently that the event will only grant access to fans who have received a vaccination against Covid-19 in what is the first major tennis tournament to take place at full capacity since the onset of the pandemic. This comes despite tickets being on sale for two months with no such restrictions originally in place.

The United States Tennis Association (USTA) implemented the move in response to a decree from New York City mayor Bill De Blasio in which he said that the Arthur Ashe Stadium – which has a removable roof – is designated as an ‘indoor’ arena, meaning that masks must be worn inside of it to comply with the state’s Covid-19 legislation.

In response, the USTA moved one step further after designating that fans must show proof of vaccination in order to gain entry to the event – even after they held a press conference last week in which they said that they viewed the Arthur Ashe Stadium as an outdoor arena, hailing the venue’s air filtration system.

Less than a week later, they changed their tune.

“We all have seen in a world still dealing with COVID-19 and things began to shift,” USTA’s Chris Widmaier said. “With the release of the Mayor’s Executive Order last week, we, and everyone else in New York City, got further details on identification of indoor public spaces. We began to make adjustments then. Over the past day or so, further evolution on what specifically qualifies as an indoor space became clear, so we needed to further adjust our protocols.

“Certainly [it] was never our intent to inconvenience anyone who purchased a ticket, but Covid-19 and the Delta variant are still causing problems and obstacles for all of us, and the US Open will follow all governmental guidelines and do our best to limit any inconveniences to our fans.“

But despite the mayor’s office announcing that they “fully support” the move, more than a few supporters have voiced their opposition to the restrictions – particularly considering the fact that around half of the players in the ATP and WPT remain unvaccinated themselves.

“So US Not-Open,” responded one tennis fan to the news, while another railed against the so-called “open discrimination” on show from tennis authorities in locking ticket-buying fans out of the event if they can’t prove that they are vaccinated.

Another highlighted the fact that many of the players themselves have yet to be vaccinated and asked aloud what the likes of Novak Djokovic and Patrick McEnroe would make of the situation.

Several players within the sport – most recently Stefanos Tsitsipas – have voiced their hesitancy at receiving one of the myriad vaccines currently available while Djokovic has also talked of his reluctance on several occasions, but former Wimbledon champion Andy Murray (who plays Tsitsipas on Monday) appeared to back the restrictions in his own comments.

“The reason why all of us are getting vaccinated is to look out for the wider public,” said the Briton. “We have a responsibility as players that are traveling across the world to look out for everyone else as well.” 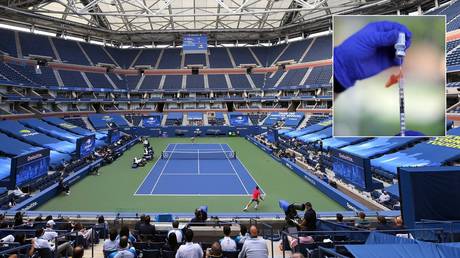 Apple Watch 7 to come with ‘bigger...

India wants Russia to be major importer of Darjeeling tea, like it was back in the USSR