UFC loser Conor McGregor has called himself ‘Big Foot’ while propping up his broken leg on a sun lounger in Beverly Hills alongside pop superstar Justin Bieber, promoting whiskey and sending a message to fighter pal Artem Lobov.

With his leg in a cast following his harrowing defeat to Justin Poirier at UFC 264 earlier this month, former champion McGregor had clearly traded punching for back-slapping as he congratulated Bieber on his fashion endorsements while sharing a series of photos of the famous pair.

Chart-topper Bieber was among the 20,000 crowd attending McGregor’s excruciating end to his trilogy fight with Poirier at Las Vegas’ T-Mobile Arena, joining the likes of former US president Donald Trump to watch him slip to a second defeat of the year to the man he once beat comfortably.

One of the few people in the world with more social media followers than McGregor, Bieber told his Instagram fanbase of more than 185 million that he was indulging in a “breakfast of champions” with the MMA megastar.

“It’s about how you get back up,” added the Canadian, while his father, Jeremy, chimed in with the words “Irish laugh”.

McGregor voiced his excitement to watch Bieber play at huge California arena the SoFi Stadium this weekend, which will be the host venue for next year’s Super Bowl.

“JB and Big Foot,” he said, showing off his tattoos while wearing only a pair of small yellow shorts.

“We rule Beverly Hills. God bless, my brother. Backed by the highest power.”

McGregor reiterated his “love” for Bieber and hailed him in the week before the Poirier bout.

“I’ll tell you what, mate, I appreciate the message from the last fight. That meant a hell of a lot to me – it really, truly did,” he told Bieber at the time, thanking him for his show of support after he was knocked out by Poirier in January.

‘The Notorious’ is unlikely to be putting on any kind of show in the octagon for quite some time following an outing that ended with him leaving on a stretcher, although he has signaled that he will be watching one of his long-term training partners this weekend.

“‘The Russian Hammer’ is fighting live on pay-per-view,” he said, encouraging his fans to watch Artem Lobov, who has backed him since his loss and warned that he should not have been interviewed immediately afterwards, ahead of his latest fight.

Revered Lobov takes on Denys Berinchyk, a silver medalist for Ukraine at the 2012 Olympic Games, in a bare-knuckle bout for Mahatch FC in Kiev on Saturday. 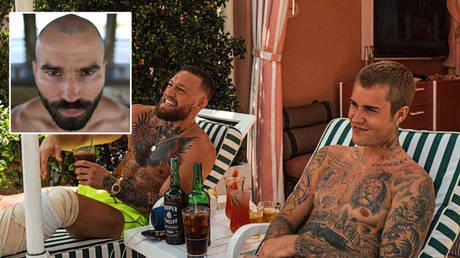 Ole’s staying at the wheel! Manche...