UFC number one pound for pound fighter Khabib Nurmagomedov has picked up many awards, belts and trinkets in his illustrious MMA career, but he added another recently by bizarrely receiving the ‘Best Mum’ medal in Dagestan.

After climbing to the top of the P4P rankings in his sport, Khabib is now recognised in Dagestan as the number one mom.

Khabib was awarded the medal in Derbent, around 125km south along the Caspian Sea coast from his hometown of Makhachkala, after keeping his promise to his mother to end his career after a comfortable second round submission win over Justin Gaethje which saw him move to 29-0.

“This is the medal they presented me with in Derbent,” the fighter said in his Instagram stories, with a picture of the golden trinket inscribed with the words ‘Best Mom’ in red engraving in Russian.

The medal was presented to the 32-year-old after a meeting with youngsters in the town. His promise came after the death of his father Abdulmanap Nurmagomedov from complications due to Covid-19 infection earlier this year.

Khabib recently quashed rumours he could make an immediate u-turn to extend his unbeaten run in the cage to 30-0, stoked by Dana White and his own manager Ali Abdelaziz, by claiming his time is now taken up by tending to his farm and studying.

“I had a goal to reach the summit [of MMA] and I got there,” he said. “Further I don’t have any competitive interest [in sport].”

The lightweight ruler is currently focussing on completing a degree in agricultural studies at the Plekhanov Russian University of Economics and furthering his agricultural interests. 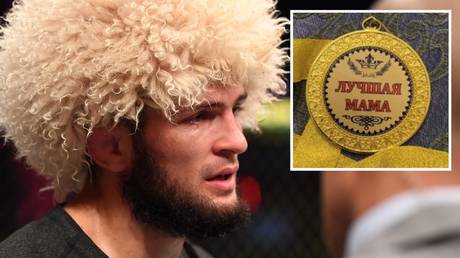