UFC star Colby Covington reassured fans he has tested negative for Covid-19 after he attended the US presidential debate, while blasting those who supposedly wished ill on Donald Trump after his Covid-19 infection.

On Friday, the president announced via Twitter that he and the First Lady had contracted coronavirus.

On Saturday, outspoken Trump supporter Covington posted a picture on Instagram of the president’s head photoshopped onto the body of Sylvester Stallone as Rocky Balboa, alongside the caption: “For the people who constantly slander my name, but are all of a sudden concerned with my health and well being: I’m COVID free.

“I’ve been tested seven times in the past three weeks, including prior to and after meeting with the POTUS.

“I was also tested during fight week, as well as before and after the debate. ALL NEGATIVE.

“Speaking of ALL NEGATIVE, how about all the slime in Hollywood and woke sports wishing harm on a 74-year-old grandfather!?! How tolerant! Unfortunately for them and fortunately for America, Donald Trump is a fighter!!!

“He KO’s the fake news media daily. He KO’d Slow Joe and Chris Wallace at the same time on Tuesday! Now it’s time for a casual weekend KO of COVID! Here’s to a speedy recovery and four MORE YEARS!!!”

The 32-year-old was personally congratulated by Trump over the phone during his post-fight press conference after his win over Tyron Woodley on September 19.

The fifth-round TKO victory took the welterweight’s MMA record to 16-2.

Six days prior to that fight, ‘Chaos’ had attended a Trump campaign rally in Nevada alongside UFC president Dana White and interim lightweight champion Justin Gaethje.

Covington has been a vocal critic of the Black Lives Matter movement, referring to its supporters as ‘domestic terrorists’, and has reserved particular ire for the likes of NBA icon LeBron James, who he has labelled a “spineless coward.”

On Saturday night, White House physician Dr. Sean Conley issued a health update on Trump in which he said the US leader had “spent much of the afternoon conducting business, and has been up and moving about the medical suite [at Walter Reed Hospital] without difficulty,” but warned he was “not yet out of the woods.”

Trump himself issued a message in which he said he was “feeling much better” and was hoping to “be back soon.” 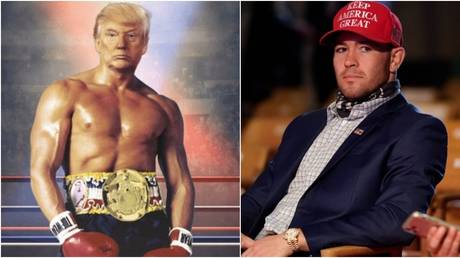