Close
Trending News
HomeSportUFC Vegas 4: Lightweight crowd-pleasers set to light up Las Vegas in a bid to earn a shot at Khabib (VIDEO)

UFC Vegas 4: Lightweight crowd-pleasers set to light up Las Vegas in a bid to earn a shot at Khabib (VIDEO)

UFC Vegas 4: Lightweight crowd-pleasers set to light up Las Vegas in a bid to earn a shot at Khabib (VIDEO)

Louisiana native Poirier is looking to bounce back into contention in his first fight since he was submitted by Khabib at UFC 242 last September.

Since that loss, he has been building himself back up and sharpening his skills ahead of another run toward the UFC’s 155-pound title.

But standing in his way is the perennially-underrated Kiwi Hooker, whose form since moving up from featherweight to lightweight has been nothing short of outstanding.

Hooker has lost just once in his eight fights as a UFC lightweight, and has finished the likes of Ross Pearson, Marc Diakiese, Jim Miller, James Vick and the man who is set to challenge for the UFC welterweight title at UFC 251, Gilbert Burns, who he knocked out inside a round at UFC 226.

Hooker is riding a three-fight win streak, and the usually-laid-back New Zealander has not been shy to open up and speak his mind to secure himself a career-defining fight this weekend.

If Hooker wins, he will offer a new threat to Khabib and interim champ Justin Gaethje at the top of the UFC’s lightweight division.

But if Poirier prevails, it will set up either a title rematch with Khabib, or a mouth-watering rematch with Gaethje, who he stopped in the fourth round of their epic battle in April 2018.

Both fighters have fan-friendly, exciting fighting styles, and with a potential shot at UFC gold likely to await the winner, expect both men to throw caution to the wind in a thrilling main event clash at UFC Vegas 4 on Saturday night. 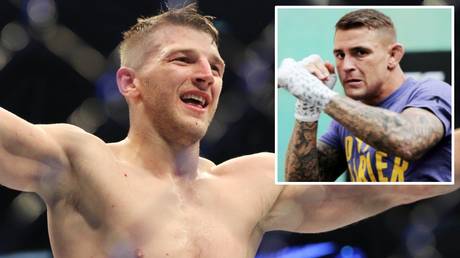 From leader to outsider: Figur...