Curtis Blaydes may have won his main event fight against Alexander Volkov at UFC Vegas 3 on Saturday night, but he won few fans with his performance – and left UFC president Dana White bemused with his display.

Ahead of his dominant victory over Volkov, Blaydes tweeted to tell fans not to expect anything spectacular from him as he vowed to use his wrestling to “rag-doll” the Russian in Saturday night’s main event in Las Vegas.

“FYI if y’all were hoping to see a 25-minute stand-up war you probably shouldn’t tune in to the main event, cause I fully intend on rag-dolling my opponent,” he tweeted.

Blaydes was good on his word, as he used his smothering wrestling game to shut down Volkov’s striking and, even though he finished the fight absolutely exhausted for his efforts, there was no controversy over the result as he claimed a unanimous decision victory.

After his effective, but unspectacular, performance, Blaydes was unapologetic, telling reporters at the post-fight press conference, “I know who I am now. I’m the heel.

“You don’t like what I do? I like to make you mad. I like to win. That’s probably the best part about this win, is I predicted this, and I did it.

“Twenty-five minutes. Didn’t look the best, but I’m OK with having a gritty win like that, and I know a lot of fans didn’t like it, and I’m OK with that. It makes me happy.”

But while Blaydes declared himself happy, UFC president Dana White certainly wasn’t, and the UFC supremo slammed Blaydes’ attitude after the event.

“He won. He talked a lot of sh*t coming in this week. I don’t think you talk the sh*t he talked this week and come in and perform like that. Talking about rag-dolling people, and he’s not getting paid, and yada yada, he should be getting the title shot.

“He gassed out at the end of the third round, made it to the fifth and won the fight. Yeah, he won.”

Blaydes’ immediate future looks unclear, with the UFC title set to be contested between defending champion Stipe Miocic and former champion Daniel Cormier in a trilogy fight at UFC 252 later this summer.

Waiting for the winner is Cameroonian wrecker Francis Ngannou, who has blasted his way back into title contention. He’s undoubtedly ahead of Blaydes in the title stakes, due to his more fan-friendly fighting style and the fact that he has twice finished Blaydes in the UFC, including a brutal 45-second demolition last year.

It means that Blaydes will either have to sit things out for a while, or defend his position as the second contender in line while the rest of the division above him runs its course and a title shot opens up.

Blaydes himself suggested he’d be happy to sit and wait for a title shot, but White suggested otherwise, and said Blaydes should look to stay active and improve in order to take advantage of a future title shot, if one ever materializes.

“With his performance tonight and his cardio, I wouldn’t wait around if I was him. I’d stay active. I’d stay busy,” he continued.

“When you talk the sh*t that he did and perform like he did tonight? You look stupid.” 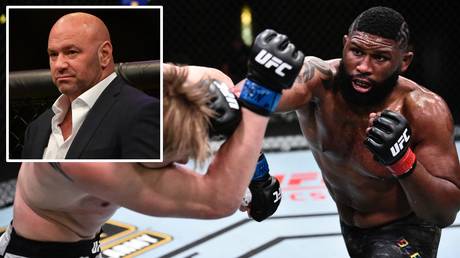