Don House has issued an apology after he was seen on last week’s UFC broadcast wearing a patch promoting the ‘QAnon’ conspiracy theory which states that numerous well-known figures are involved in child trafficking.

House was spotted by viewers of the UFC Vegas 3 event sporting a patch on his sleeve bearing the sequence of letters ‘WWG1WGA’ – or ‘where we go one we go all’ – a term which has become synonymous with the ‘QAnon’ conspiracy theory, which suggests that a ‘deep state’ group is working against President Donald Trump and his supporters.

The conspiracy theory has seen a surge in fringe support in the past two-and-a-half years despite its detractors highlighting that it has been almost entirely debunked, but the right-wing conspiracy still manages to have its impact felt in United States national media – such as this past UFC event.

The UFC disavowed House’s actions when they were pressed on the matter by a reporter this week, and said that they have launched an investigation into the incident.

“This was a violation of our staff event outfitting policy,” a UFC statement reads.

House, meanwhile, said that his wearing of the QAnon phrase didn’t indicate his support for the group and that he was merely supporting the ideology behind it.

QAnon has been declared a domestic terrorism threat in the United States due to several hostile actions by its supporters since the movement began gaining popularity in late 2017, with the infamous ‘Pizzagate’ incident at a Washington DC restaurant in 2016 being generally regarded as a precursor to the conspiracy theory.

For his part, House apologized to the UFC for wearing the logo and distanced himself from the conspiratorial element of the group, instead saying that he intended the message to bring people closer together.

“My message is simple,” House said. “It’s not about I signed up for a club that wants to overthrow the government. I’m not a part of that nonsense. But I do like the message where it talks about everyone being as one in the United States, and the planet, for that matter. That’s my message.

“If I’d known I’d get this much flack, I would have never worn the thing, to be honest with you. People’s belief is their personal belief. That was mine. I was just showing that I really love the message, especially in this day and time with all the crap that’s going on.

“That’s the message that I’ll always live with, and I thought it would look great on my sleeve. I didn’t know it would cause this much controversy. Do I regret it? Yeah, I do, the embarrassment for the UFC and to Dana, because he is a friend of mine. But do I believe that we as Americans should be one? I will until the day I die.”

In an unrelated incident, a flag appearing to promote QAnon was found on the roof of the famed Jackson-Wink MMA Academy in Albuquerque, New Mexico a week ago. The owners of the gym indicated that they didn’t know how the flag came to be flown on their building and removed it as soon as it was pointed out. 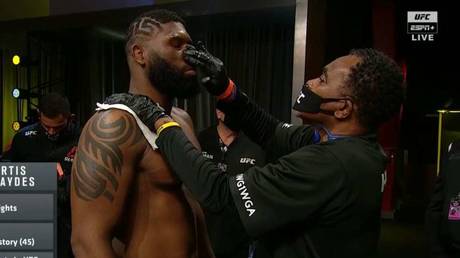