Confused fans have responded to UFC light heavyweight champ Jon Jones after he deleted a video slamming retail store Hollister for using the Spanish word for black – before denying he’d done so due to misunderstanding its context.

Followers rushed to check that Jones knew that a selection of black-colored jeans on the shelves of a store in the Coronado Center in New Mexico had been labeled “negro” as a direct translation of their color into Spanish for the large number of Hispanic shoppers in the region.

The state has one of the largest Hispanic populations in the US, amounting to around a million people who make up almost half of its total.

Jones seemed unaware that the word, which is outdated and racially offensive when it is used to describe black people, is considered a harmless translation when it is used in other settings.

I’m totally aware how to say the word black in Spanish.. I still feel like #Hollister‘s choice of words were insensitive and insulting.. Call me sensitive if you want but today I was totally insulted. pic.twitter.com/vRroEK5uaY

He surprised UFC fans by complaining: “Hollister, I’m disgusted with you guys. I’m sure you could’ve gotten way more creative than that.”

As he rotated the camera to show one of his daughters staring at him in a mask, Jones added: “Sucks that I have to try to explain this to my daughters on Father’s Day. I understand that negro means black in Spanish but this is bullsh*t and uncomfortable.”

Baffled audiences spent hours explaining the meaning of the word, questioning Jones’s intelligence, producing jokes and memes and debating whether the notoriously provocative champion was attempting to troll them before he deleted the original post on Monday.

“I’m totally aware how to say the word black in Spanish,” he insisted. “I still feel like Hollister’s choice of words were insensitive and insulting. Call me sensitive if you want but today I was totally insulted.”

Jones is known for publishing controversial posts – often fiercely insulting his rivals – before deleting them once thousands of people have had the chance to take screenshots and react to their often-inciteful content.

Literally half my friends are “Hispanic” And I’m pretty sure every single one of them, even the ones who don’t read English well could have found those black jeans https://t.co/VUFCCjmbP2

He appeared to be taking his latest curious outburst much more seriously, though, replying to a comment that asked whether he wanted Spanish people to be able to find clothes by spikily retorting: “Literally half my friends are Hispanic.

“And I’m pretty sure every single one of them, even the ones who don’t read English well, could have found those black jeans.”

When a viewer observed that the text placement describing the jeans was “definitely odd,” Jones, who last week told readers that he had relished the chance to resume clothes shopping following the easing of lockdown restrictions across the state, threatened to return to the store to create a follow-up video.

I know it seems silly to some people but none of the other jeans were labeled anything like that. I’ll probably stop by tomorrow and make a video to show you an example. #Cornadomall https://t.co/9DIQ8HRdKi

“I know it seems silly to some people but none of the other jeans were labeled anything like that,” he explained. “I’ll probably stop by tomorrow and make a video to show you an example.”

He also endorsed a suggestion by an MMA fanatic that the marketing graphics used by the store had been misguided, retweeting the reply to his following of more than 2.3 million.

One fan told Jones: “Are you mad that they have Spanish labels? You’re being overly sensitive. It’s literally just a label describing the color of the clothes in two languages. The spanish word for black is ‘negro – it isn’t f*cking Hollister’s fault.

“Chill out, Jon. You really don’t have to look that hard for sh*t to be offended about. We have enough real discrimination happening that you could and should address.”

I have no clue. So much going on in our country but THIS is what’s offensive to him? I dont even know what to say.

Take the L champ this is your first legit loss lol

Another wrote: “I love Jon but I honestly don’t understand. Maybe it’s because I am white but it’s literally the Spanish alternative. What does he expect them to do? Change the word in the language?”

Referencing Jones’s near-flawless UFC record that saw his only defeat come by disqualification against Matt Hamill in 2009, a commenter joked: “Take the L, champ. This is your first legit loss.”

Prolific social media user Jones made his grievances with UFC president Dana White public last month when he took to Twitter to angrily complain about the purse on offer for a much-anticipated fight with heavyweight Francis Ngannou, threatening to take a prolonged break from the sport as a result of the failed negotiations. 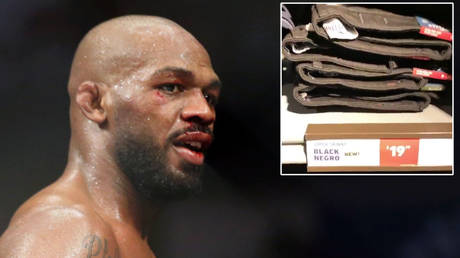