Covington, who has built his public profile as being a MAGA-obsessed follower of President Trump, attended the first of three debates between Trump and Democratic nominee Joe Biden in an event where Trump appeared to borrow a page from Covington’s own book of self-publicity in the often tetchy back-and-forth ahead of the November 3 election.

The former UFC interim champ was invited to the debate as a special guest of the president and was pictured wearing his red MAGA hat in the company of Kimberly Guilfoyle, partner of Donald Trump Jr., and former New York City mayor and Trump attorney Rudy Giuliani.

Covington has attended several events in the company of President Trump, having previously been pictured alongside the 45th president in the Oval Office and most recently at a campaign stop in Nevada, and has trumpeted several of the Trump’s talking points.

Following his recent win against former champion Tyron Woodley, Covington launched into a campaign rally-style speech in which he took shots at Biden, NBA superstar LeBron James and railed against what he described as “woke athletes“.

“Ladies and gentlemen, the silent majority is ready to make some noise,” Covington said on the UFC broadcast.

“If you thought that was a beating, just wait until November 3 when Donald Trump gets his hands on Sleepy Joe [Biden]. That’s gonna be a landslide.”

Covington also received a congratulatory telephone call from Trump in the moments after his fight with Woodley in a unique moment which was captured on the ESPN broadcast.

“Chaos”, who is never too far from controversy, attracted further criticism for comments in which he described the “Black Lives Matter” movement as being a terrorist organization and was forced to defend accusations of racism after describing welterweight champion Kamaru Usman as being part of a “little tribe” and that he communicated using “smoke signals“.

His comments were criticized by the UFC’s apparel sponsor Reebok, while UFC president Dana White – who is also a prominent supporter of the Trump administration – said that he believes in “free speech” and refused to “muzzle” Covington. 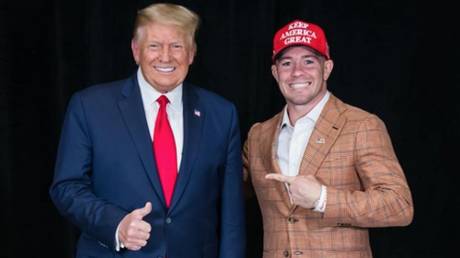