Welterweight fighter Mike Perry will seek help for alcohol abuse and behavioral problems and will not be offered bouts until completing a treatment program, the UFC has said after Perry was seen punching a man in a restaurant row.

Footage released earlier this week showed UFC welterweight Perry flooring an older man in a Texas restaurant in an incident in which he also reportedly struck two others and was heard shouting racial slurs.

“UFC is aware and troubled by the video that was released last night concerning Mike Perry,” read a statement from the promotion on Thursday.

“The conduct displayed by Perry is not reflective of that of our organization. Perry apologized for his behavior and acknowledged he was disappointed with himself that his actions may have reflected poorly on UFC.

“He further acknowledged that he believes he has some issues related to alcohol abuse and has informed UFC that he has committed to immediately seek professional treatment, including substance and behavioral counseling.

“At this time, UFC has informed Perry that he will not be offered a bout, and the parties have agreed to evaluate next steps for Perry following the completion of his treatment program.”

The altercation took place at the Table 82 restaurant in Lubbock, Texas, on Tuesday night and ended with one man needing hospital care after he was knocked out by welterweight slugger Perry.

The Lubbock Police Department is reportedly investigating Perry for one count of misdemeanor assault, although no arrests have been made.

The hot-headed Perry – who has previously been filmed flooring a fellow patron at a Florida nightclub in similar scenes – was at the Texas eatery with his girlfiend Latory Gonzalez, who corned him for his last fight at the end of June, and a female friend.

Perry, 28, had been ordering berry mojitos before the incident and is said to have become involved in a row with another male patron of the restaurant as well as the manager.

Reports also claim Perry enagaged in a physical row with the female companion of his girlfriend Gonzalez after she had tried to intervene to calm things down.

In response, Perry has said that several people had laid hands on him first before he reacted.

Footage of the violent scenes shows Perry warning the elderly man that he would “knock your old ass out,” then making good on his promise after jibing: “You motherf*cker, you fat piece of sh*t.”

A woman can be heard screaming as the man falls to the floor and Perry angrily makes his way to a ledge just outside the restaurant, sitting down while shouting: “Back up, n*****.

Perry, who is nicknamed ‘Platinum’ and boasts a 14-6 professional record, issued a “no comment” statement on social media after the footage went viral on social media.

The fighter was widely condemned for his actions and was also mocked by the likes of former UFC veteran Chael Sonnen.

Perry has had scrapes with the law in the past, doing jail time in Florida in 2014 after being arrested for battery and violating probation for a burglary charge. 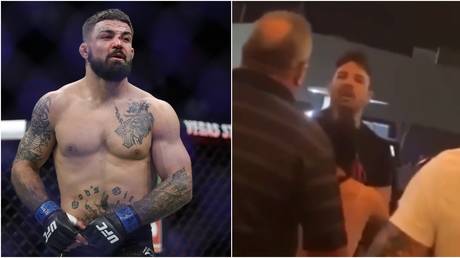 All the new rules for gyms you’ll...

What is Rishi Sunak’s net worth?