It is one of the most ill-fated match-ups in combat sports history but Khabib Nurmagomedov versus Tony Ferguson could still happen, according to UFC president Dana White.

A Khabib-Ferguson showdown fell by the wayside earlier this year for a fifth time as the coronavirus pandemic put paid to their hopes of meeting in April in Brooklyn.

Ferguson was subsequently beaten by Justin Gaethje in May – seemingly ending any chances that The Eagle and El Cucuy would ever meet in the UFC octagon.

Khabib and Gaethje will do battle for the lightweight title on Fight Island at UFC 254 on October 24, but beyond that Ferguson is not completely out of the picture, according to White.

“If Khabib does beat Gaethe, you get Tony Ferguson another fight [against a different opponent], which we’re working on right now,” he told Sports Illustrated.

“And hopefully that fight with Khabib [and Ferguson] happens because I know people want to see it.”

White admitted that with the bout seemingly ‘cursed’, he feared for the consequences should he try to book it for a sixth time.

“I don’t think I’ve ever seen a fight fall apart as many times as those two,” he said.

“It almost scares me to make the fight again. What’s going to happen? An asteroid comes to earth? That’s the level of bad this thing is.”

Ferguson had appeared set to face former Khabib victim Dustin Poirier on the undercard at UFC 254, although Poirier declined the contest citing pay differences with the organization.

Unbeaten lightweight ruler Khabib revealed last week that if he sees off the dangerous challenge from the hard-hitting Gaethje, White had “promised him something special” for his next bout. 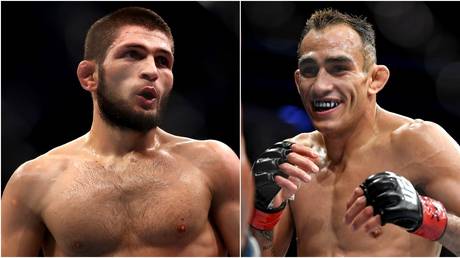