Dana White is expecting to meet reigning UFC lightweight champion Khabib Nurmagomedov during the latest “Fight Island” residency where he says he hopes to finally persuade the undefeated Russian to return for one last fight.

Nurmagomedov is understood to be attending at least some of the UFC’s latest three-fight stint in Abu Dhabi, and White is keen to meet with him for what will be the first face-to-face between the pair since Khabib unexpectedly announced his retirement from mixed martial arts in the moments after his submission win against Justin Gaethje last October.

White has repeatedly suggested that he thinks there is a reasonable chance that Khabib could be persuaded to come back for one final fight in pursuit of what would be an unparalleled 30-0 record in mixed martial arts – but whether or not he gets the answer he wants, White says that Nurmagomedov’s future will likely be resolved this month either way.

“I’m obviously meeting with him because I think that he should fight again,” White told ESPN.

“Look at what he did to Justin Gaethje. Look at what he’s done to every opponent he has faced. I think he should fight again and I’m going to press him as hard as I can for one more.”

Khabib’s decision to step away from the sport came soon after the passing of his father and coach, Abdulmanap, due to Covid-19 complications in July of last year – however, it is thought in some circles that White has some room to maneuver in his talks with Khabib, given that his father had stated the express goal of his son retiring with an unblemished 30-0 tally.

While White admits that he would ideally like Khabib back for “10 more” fights, he says that he will settle for a one-fight deal.

“As a promoter, you always want to see the best guys in the world, but at the same time, when a guy wants to retire, he probably should,” White said. “The difference with a guy like Khabib is he’s been through so much, and losing his dad was a major blow to him. Yet, his dad wanted him to hit 30-0.“

As for who any potential return fight may be against, White was clear: it would be Conor McGregor.

“And right now, he’s as focused as he’s ever been. I don’t know if this is going to be the same Conor after the Poirier fight, but if this Conor sticks around for the next year, how do you not do Khabib vs. Conor again?“ 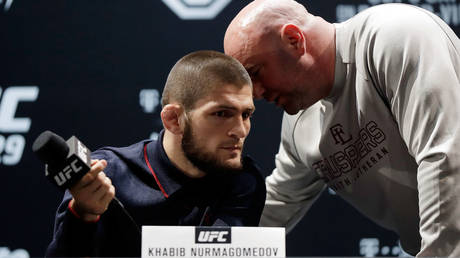