Close
Trending News
HomeSportUFC 257: Conor McGregor predicts when he will KO Dustin Poirier, says American is ‘levels below him’

UFC 257: Conor McGregor predicts when he will KO Dustin Poirier, says American is ‘levels below him’

UFC 257: Conor McGregor predicts when he will KO Dustin Poirier, says American is ‘levels below him’

Conor McGregor’s first fight against Dustin Poirier lasted just 106 seconds but the Irishman has predicted he will dismantle his rival even more quickly when they meet at UFC 257 later this month.

McGregor knocked out Poirier in explosive fashion inside the first round of their featherweight match-up in Las Vegas at UFC 178 back in September of 2014, and more than five years later the pair are set to do battle again.

This time the two stars will meet at lightweight in a contest at the Etihad Arena on January 23, which will be the culmination of the UFC’s latest sojourn to its second home on Fight Island.

Despite the time and place being different, McGregor has put on his ‘Mystic Mac’ hat again to predict that the outcome will essentially be the same when he steps into the octagon with Poirier.

“I like Dustin. I think he’s a good fighter,” McGregor said in a promo snippet.

“He’s even a great fighter. But great is still levels below me. I’ll knock Dustin out inside 60 seconds.”

In the same clip Poirier said he will “get his hand raised by any means necessary,” but earlier expressed his wish for the pair “to be dripping blood and hurting and suffering early in the fight… then we can find out who’s a real fighter.”

Perhaps unsurprisingly, both McGregor and Poirier have changed substantially since their first encounter, with the Irishman going on to become a two-weight UFC champion and bona fide megastar.

Poirier reached interim lightweight champion status and has won all but two of his 11 fights (not including one no contest) since that night in Las Vegas when he fell to McGregor’s concussive hands.

Both ‘The Notorious’ and ‘The Diamond’ have shared history in that they have been submitted by undefeated and Russian lightweight king Khabib Nurmagomedov.

McGregor last fought almost exactly a year ago, when he defeated Donald ‘Cowboy’ Cerrone after just 40 seconds of their welterweight fight at UFC 246.

The Irishman had hoped that would kickstart a ‘season’ of fights in 2020, but those ambitions were frustrated by the Covid-19 pandemic and McGregor again took a brief ‘retirement’ from the sport before returning to face Poirier.

‘The Diamond’ was last in the octagon in June, when he claimed a unanimous decision win in a five-round war with New Zealander Dan Hooker. 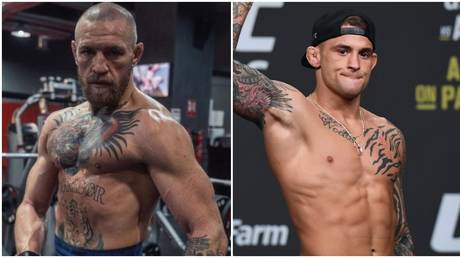 Lockdown could be made TOUGHER wit...