UFC 251: Three undercard bouts not to miss on ‘Fight Island’

UFC 251: Three undercard bouts not to miss on ‘Fight Island’

There is a whole lot more to the UFC 251 card than the three title fights which top it, so RT Sport has selected three potential bangers from the undercard which could steal the show.

While the majority of the headlines have been squarely focused on the hugely anticipated welterweight title showdown between Kamaru Usman and Jorge Masvidal – as well as the two other world championship fights on the menu in Abu Dhabi – the UFC have stacked the card ahead of their most anticipated event of the summer.

So what are the dark horse contenders for ‘Fight of the Night’?

It is hard to know who to give the pre-fight ascendency to ahead of this rematch between the two former UFC strawweight champions. Namajunas and Andrade first met in the cage a little more than a year ago where ‘Thug Rose’, who was defending her world title, enjoyed a dominant start before being knocked out by a high velocity slam delivered by the Brazilian in the second round.

It was as emphatic a knockout as was seen in all of mixed martial arts last year and led to a prolonged absence from the cage for Namajunas. Andrade, meanwhile, surrendered the title to Zhang Weili a little over three months later.

Whomever has their hand raised in the sequel will take another giant step towards an opportunity to regain their world title. The loser? Well, they must face the reality of a rather indignant walk to the back of the line. It is hard to know who will enter the bout with more momentum. Namajunas was in control early, Andrade was decisively swift with the finish.

Whoever shifts into gear first in this fight won’t want to ease up and repeat their mistakes from last time around. And it should be fascinating to watch.

Former ‘Dancing with the Stars’ contestant Paige VanZant has been among the chorus of fighters recently announcing their displeasure with the current UFC pay scale for fighters and, as she fights out the last bout on her current deal, it is highly likely that win, lose or draw, VanZant will fight her last UFC fight for some time on ‘Fight Island’.

While that possibility will likely pique the interest of Bellator and Scott Coker, it will be a true test of VanZant’s worth as a fighter to see what type of deal she can command elsewhere – and her bargaining position will be very much strengthened with a win on Saturday night against Amanda Ribas.

Easier said than done. Ribas, 26, has all the hallmarks of a potential star in the UFC and at 9-1 has had a near-perfect professional career to date. She has already earned a win against UFC star Mackenzie Dern. Another one here could mark her out as a star.

Every so often a fight comes along which practically promises fireworks and on Saturday’s UFC 251, the battle of the European light heavyweights Volkan Oezdemir and Jiri Prochazka is just that.

Swiss fighter Oezdemir’s early run through the UFC was filled will a string of early finishes punctuated by an unsuccessful title fight opposite then-champ Daniel Cormier. His reputation for being capable of ending a fight at a moment’s notice has been retained however, and he will be hoping to showcase exactly why against the Czech Prochazka – who makes his UFC debut after losing just one fight in the past seven years.

Thankfully for armchair viewers, Prochazka boasts an incredible 23 knockouts in his 26 careers wins (against just 3 defeats) and much like his opponent this weekend, doesn’t like being in the cage a second longer than he has to.

Indeed, seven of his last eight fights have ended by first round knockout – making him a prime candidate to be among the post-fight bonus recipients when UFC boss Dana White hands out his brown envelopes after the event. 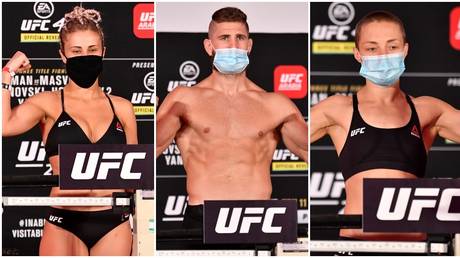