British bantamweight “Dangerous” Davey Grant lived up to his fighting nickname as he delivered a one-punch knockout to make history in spectacular fashion at UFC 251 in Abu Dhabi.

Grant had made history before the bout had even started by being the first UFC athlete to step into the cage for a fight at “UFC Fight Island,” the UFC’s specially-created fight bubble on Yas Island.

But the 34-year-old would produce an even more memorable moment when, after two back-and-forth rounds – and a first-round knockdown – Grant bounced back to score a colossal one-punch knockout and score his first KO finish in the UFC octagon.

Remarkably, Grant revealed post-fight that he had sustained a broken jaw in the first round, when opponent Martin Day dropped him with a huge punch. But he said he was more than happy to stand toe to toe with the Hawaiian to get the win.

𝐃𝐀𝐍𝐆𝐄𝐑𝐎𝐔𝐒. 😳@DaveyGrantMMA leaves the judges out of it with a HUGE knockout! #UFC251

🎤 @Bisping is lost for words after that one! #UFC251 pic.twitter.com/LzWmbHrSXA

“I thought I’m going to try and be technical in the first two rounds. I thought if it was all working, I’d go to town and then have a war.

“I wanted the first fight on ‘UFC Fight Island’ to be a good war. I think we gave them that.

“I knew that if I could get inside (I could knock him out). I knew he has really good kicks and good hands. He dropped me in the first and I didn’t know where I was at.

“I thought I’m still going to stand and trade with him. I wanted a fight like this in the UFC. I feel like I’ve been a bit cautious. I wanted to stand in the pocket and bang – that’s how you get the knockout.”

The knockout also proved to be a profitable one for Grant, who was handed a $50,000 Performance of the Night bonus by Dana White for his stunning finish. 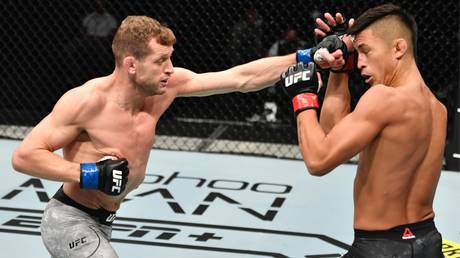 'It didn't resonate with...

‘The Moscow 25’: Hardy band of Leicester fans make use of no-quarantine rule, head to Russia for seven-goal Spartak thriller