Manchester United meet Sevilla in the Europa League semi-finals in Cologne tonight knowing that they may need an improved performance to reach the final. Their Liga opponents and their talented cast are sure to have other ideas.

Nineteen matches unbeaten and with a Premier League scalp to their name after beating Wolves at the death on Tuesday, Sevilla are capable of posing more problems for United than FC Copenhagen did six nights ago, despite the Danes taking the Red Devils to extra-time.

United failed to perform in both the semi-finals they have reached this season, losing 3-1 at home to Manchester City in the EFL Cup – although a creditable 1-0 win in the second leg almost turned the tie around – and by the same scoreline to Chelsea in the FA Cup last month.

Spirited Copenhagen helped United to reach the final four by failing to produce a shot on target from the chances they created, and coach Ole Gunnar Solskjaer has had to do more homework since learning that his side would not be facing familiar faces in the form of ousted Wolves.

“We’ve lost two semis already this season, which is painful,” reflected the manager who has not lifted a trophy since he won the domestic cup in Norway with Molde more than seven years ago.

“I’ve said it before: I hope that pain will give us that little bit extra motivation or inspiration, focus. I know everyone’s focused anyway but that little extra edge that might drive you to [think], ‘I don’t want to feel that pain again.'”

The chief protagonist of any further torment United might suffer tonight could be Ever Banega. The Argentine playmaker has been much talked-about in the press over the weekend, which is little surprise given his creative abilities and colorful backstory.

When Valencia spent $23 million to bring Banega to Europe from his first club Boca Juniors, they couldn’t have expected one of the surprise elements he had to offer being a self-inflicted injury after he failed to deploy the handbrake correctly while filling his car up with petrol.

His car duly rolled back and broke the unfortunate midfielder’s ankle and two bones in his left leg, causing him to sit out the end of the 2012/13 season as part of a painful six-month layoff.

Banega is such an incredible player to watch. He’s going to be such a huge loss to not only Sevilla, but Spanish football, when he departs this summer.

By that time, Banega had long since established a degree of notoriety for a sex scandal involving a lewd act on camera that emerged days after he moved to Spain, as well as another act caught on film when he was part of a party that smashed up a hotel room after winning the Under-20s World Cup with an Argentina squad that included the likes of Sergio Aguero.

He apologized despite future Barcelona boss Ernesto Valverde denying that he had turned up to training drunk, only to eclipse those rumors of bad behavior by scoring in a draw against mighty Barcelona two days later, winning a glowing appraisal from then-Barca coach Pep Guardiola.

He was sent off twice during a brief earlier loan spell at Atletico Madrid and suffered further car misfortune when his Ferrari freakishly caught fire while he was recovering from his petrol station shocker.

As has so often been the case, though, Banega’s brilliance on the ball is now superseding his reputation off the pitch.

Bound for Saudi Arabian club Al Shabab once the Europa League has ended, he will want to ensure this is the penultimate rather than final match of his second spell with Sevilla, having spent five years at the club either side of a season with fellow semi-finalists Inter Milan in 2016.

Banega and Sevilla won the Europa League in each of the two seasons before United triumphed under Jose Mourinho in 2017, with Banega named in the team of the tournament on both occasions.

He will be helped by 15-goal countryman Lucas Ocampos and former Barcelona forward Munir El Haddadi, who is Sevilla’s top scorer in the Europa League with five goals this season, two behind United lynchpin Bruno Fernandes’s tally in the competition.

Fernandes demonstrated why United spent $64 million on him by being directly involved in eight goals in five matches for Sporting Lisbon during the group stage, scoring five times.

United’s key signing of the season has been used more sparingly by Solskjaer, scoring once and providing one assist across two starts in the knockout stages before playing the full two hours of the encounter with Copenhagen, when he scored an emphatic extra-time winner from the penalty spot.

Each of United’s last four semi-final appearances in Europe have been successful, dating back to the 2008 Champions League, ten years before they were knocked out of the competition by losing 2-1 at home to Sevilla in the round of 16 after a goalless draw in the first leg.

Those have been the only two meetings between these teams, and revenge for United would be a significant statement of intent against the club that holds the record number of titles in the competition, winning it five times since 2006.

“The main thing is excitement,” said Sevilla coach Julen Lopetegui, who raised eyebrows by describing their opponents as “complete” and “the best United side in recent years.”

“The way we’re feeling is the dead calm of a match that excites us a lot and the desire for the match to come.

“We like playing in nice and important matches, even more so at these heights. We’ve fought all year for this.”

While Solskjaer will hope his increasingly potent front three of Mason Greenwood, Anthony Martial and Marcus Rashford can play to their potential, Lopetegui named one of Fernandes’s former Sporting teammates, Nemanja Gudelj, as a boost to his ambitions of beating a second English side inside a week.

Serbia midfielder Gudelj tested positive for COVID-19 when Sevilla began their Europa League training sessions but has now joined the squad in Germany after being given the all-clear.

“His arrival is a great joy because he is very much loved in the dressing room,” said the manager.

“His welcome is a sign of what the dressing room is [about] internally. If it’s his turn, he will help us – no doubt about it.” 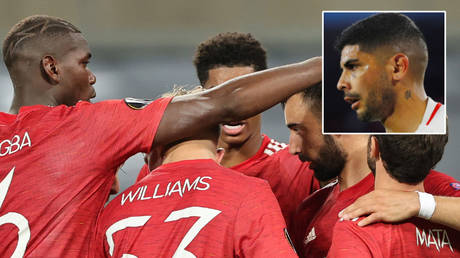