UEFA president Aleksander Ceferin says the single-game knockout format used in the Champions League during the COVID-19 pandemic has produced better football and could be revisited in the future.

Ahead of Sunday’s UEFA Champions League final between Bayern Munich and Paris Saint-Germain, Ceferin told Reuters that the makeshift format instituted to complete the 2019/20 competition has proved a success and given the sport’s administrators pause for thought about how the competition could be structured in the future.

“We were forced to do it but in the end, we see that we found out something new. So we will think about it in the future for sure,” Ceferin revealed.

The UEFA president said that without a second-leg to fall back on, teams have been forced to go for goals, producing more attacking football and exciting games.

“(There has been) not so much tactics. If it is one match, if one team scores then the other has to score as soon as possible. If it is a two-legged system then there is still time to win the next match,” he said.

“More exciting matches for sure but of course we also have to think about the fact that we have less matches and broadcasters (can) say ‘you don’t have as many matches as before, this is different’ so we will have to discuss when this crazy situation ends.”

But, if restrictions ease by next season, the regular two-legged format will be reinstated, with TV and commercial contracts requiring that arrangement until 2024/2025. However, discussions are set to begin over how the competition should be structured after that date.

“For sure it is a very interesting format. Now, I doubt as much as the calendar is now, that we could do a final eight (tournament), because it would take too much time. But a format with one match and a system like it is now, I think it would be much more exciting than the format that was before,” he said.

“We have seen it as a big success and the viewership over TV has been huge, maybe it also good because it is August and people are at home, some of them at least, but interesting, interesting tournament.”

UEFA has held a similar tournament format to conclude this season’s Europa League, while the UEFA Youth League and UEFA Women’s Champions Leagues have now had their respective finals.

“It was not an easy task, trust me,” Ceferin said.

“We are the only organization in the world which organizes international events (with) four events in four countries, which has been an extreme challenge for us,” he said.

“The most challenging was everything connected to health and this virus which is spreading all around the world. We try to control everybody, to be locked to be, separated from the rest of the world, but it is a huge challenge.” 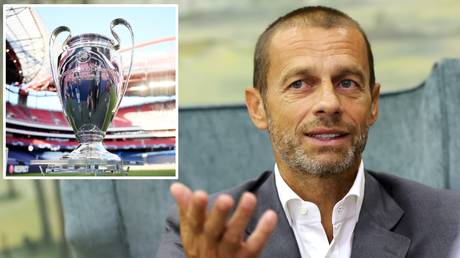