With 10 wins out of 10 in the UEFA Champions League so far, the most prolific striker in Europe in Robert Lewandowski, and a shot at a hat-trick of trophies, Bayern Munich enter Sunday’s final as favorites with good reason.

While much was made of Jurgen Klopp’s succession of defeats in finals before he won the Champions League, the Liverpool coach had already exorcised one defeat by exacting revenge on Bayern Munich for their win over his Dortmund side on the last occasion when the German champions won the trophy, in 2013.

Liverpool’s comfortable 3-1 win in Munich in the round of 16 last season proved a turning point for Bayern, who failed to reach the final eight for the first time since 2011 under then-manager Niko Kovac.

Current boss Hans-Dieter Flick was promoted from assistant manager to take the interim role before his position as permanent coach was confirmed in December, and the move proved to be an inspired one, as he won the Bundesliga and the German Cup.

In the Champions League, Bayern have arguably been even more impressive. Ten wins out of 10 games have seen Bayern power their way into the final after dispensing with the likes of Tottenham Hotspur, Chelsea and, emphatically, Barcelona. They also possess the competition’s leading marksman in Robert Lewandowski, whose 10 goals and five assists mean he is a near-cert to finish as the competition’s top scorer.

Those figures, as well as Bayern’s resounding 8-2 victory over Barca in the quarter-finals, mean that many are giving PSG little hope of outgunning Flick’s side – even with a livewire front pairing as dangerous as Mbappe and Neymar.

Barca’s best hope before the quarter-final was thought to be the creative menace of Lionel Messi and Luis Suarez, while hoping the likes of Lewandowski, Thomas Muller, Gnabry and co had an off-night.

It proved a doomed premise, as Bayern destroyed Barca with Ivan Perisic, Joshua Kimmich and Philippe Coutinho joining Muller, Lewandowski and Gnabry on the scoresheet.

Any hopes Flick might hold of engaging PSG in a similar slugfest look less likely given that Thomas Tuchel’s team have a substantially better defensive record than the La Liga giants.

“We have a game plan,” said Flick.

“I hope we can carry it out. They have only conceded five goals in the Champions League, the least in the competition, so it means their backline works like their frontline does.”

Bayern will draw level with Liverpool as the team with the third-most Champions League wins if they beat PSG, and another remarkable record is also there for the taking if they can score at least four goals for the fourth time in this season’s competition.

They are three behind the record of 45 goals in the competition that Barcelona managed in the 1999/2000 season. 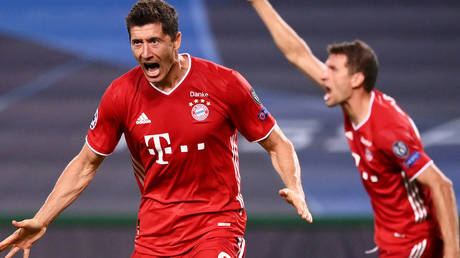