Krasnodar winger Magomed Shapi-Suleymanov says his team are out for “revenge” when they host Sevilla in their crucial Champions League clash on Tuesday – as Sevilla boss Julen Lopetegui returns to the scene of bad memories.

The Russian outsiders must win to keep alive their slim chances of making it out of Group E, in what is a debut campaign among the Champions League heavyweights.

Despite taking a shock 2-0 lead in Spain when the pair met three weeks ago and facing a Sevilla team down to 10 men for the entire second half, Krasnodar failed to hold on as the reigning Europa League champions hit back to win 3-2.

That prompted some serious soul-searching in the Krasnodar ranks, and 20-year-old winger Suleymanov – who scored a superb free-kick in Spain which was later crowned ‘Champions League Goal of the Week’ – says the Russians will be out to avenge that embarrassing turnaround on Tuesday.

Krasnodar’s Magomed-Shapi Suleymanov on ‘revenge’ for 3-2 loss to Sevilla last round: ‘This is UCL. You always want to win no matter what match. Even if we’d have won we’d want to win. Of course we want to take revenge for that defeat. We’ll do everything we can to win’ #UCL pic.twitter.com/i25piOTDXP

“We have a lot of negative emotions left over from the first match,” the highly-rated youngster told the media at the pre-match press conference on Monday.

“We played OK, but we couldn’t put the squeeze on our opponents. I hope that in this game we get revenge and can make up for the defeat in Spain.”

With fans such as UFC lightweight champion Khabib Nurmagomedov (a fellow Dagestani), Suleymanov should know all about choking out opponents – and Krasnodar will need to do just that to stand any chance of making it out of a group in which they have always been underdogs.

This is a maiden campaign in the Champions League group stages for a club which was only founded 12 years ago by billionaire local retails magnate Sergey Galitsky.

Life on Europe’s grandest club stage started well enough with a battling 1-1 draw against Rennes in France, but Krasnodar suffered a 4-0 bruising at the hands of Chelsea in their second group game – and then came the collapse in Sevilla.

That leaves them in third place in the group, level with Rennes on one point and six behind the heavyweight leaders from London and Spain, who are both on seven points apiece.

Wins on Tuesday for Sevilla and Chelsea – who play at Rennes – would guarantee their passage to the knockout stages, leaving Krasnodar to scrap it out for third place and the consolation prize of a Europa League spot.

If Krasnodar hold Sevilla to a draw then their chances of reaching the Champions League last 16 are all but dead, despite mathematically retaining an outside possibility of qualifying.

Krasnodar manager Murad Musaev – who at 37 is among the youngest coaches in this year’s tournament – has had mitigating circumstances for his team’s stuttering start to the season which has placed them languishing down in ninth in the Russian Premier League table, with just six wins from their 15 games.

Injuries and Covid-19 infections mean Musaev has rarely had anything approaching a full squad at his disposal, including in all three of his team’s Champions League group games thus far.

That has changed in recent games as he has welcomed back the likes of influential French midfielder Remy Cabella and Swedish playmaker Viktor Claesson – both of whom are expected to feature against Sevilla on Tuesday.

Brazilian-born forward Ari also provided a fitness boost by returning in the 1-0 win against Tambov at the weekend, a result which snapped a five-match losing streak for Krasnodar.

Musaev will, however, have to make do without first-choice goalkeeper Matvei Safonov, who is self-isolating after returning a dubious test for coronavirus.

Sevilla boss Julen Lopetegui will be without suspended skipper Jesus Navas – who was red-carded just before half-time against Krasnodar three weeks ago – as well as goalkeeper Bono and forward Carlos Fernandez after the pair tested positive for Covid-19.

By heading to Krasnodar Stadium and its impressive surroundings – widely seen as among the best facilities in Europe – Lopetegui is returning to the scene of what he has described as the worst day of his life.

Then Spain manager, Lopetegui and his team were using Krasnodar’s facilities as their base for the Russia 2018 World Cup when Lopetegui was unceremoniously sacked just days before the tournament after it emerged he had agreed a deal to take over at Real Madrid.

The 54-year-old insisted on Monday that he was not haunted by those memories on returning to Southern Russia, saying: “We know the facilities here well, they are world class, but the only sentiment I’m feeling now is excitement and respect for playing against a side like Krasnodar.”

Aside from their encounter in this year’s Champions League, Krasnodar and Sevilla have crossed swords in Europe before, meeting in the 2018-19 Europa League group stage.

Krasnodar picked up a 2-1 win in Russia before suffering a 3-0 reverse in Spain, although both teams qualified from the group.

The hosts will be hoping for a repeat of the first of those results in Russia on Tuesday night. 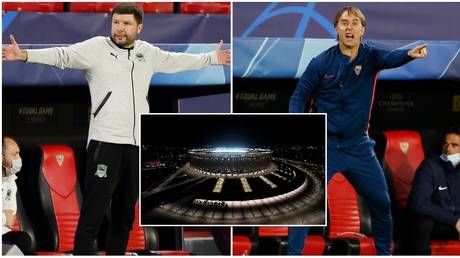