Boxing icon Roy Jones Jr’s Russian manager has told RT Sport the former light-heavyweight world champion has the ring IQ to defeat “killer” Mike Tyson on Saturday, and insists the fight is an exhibition in name only.

Voted the best boxer of the 1990s, Jones, 51, will take on 54-year-old fellow ring legend Tyson, the youngest man ever to capture the heavyweight title at 20 years old, at STAPLES Centre in Los Angeles in an effortlessly intriguing fantasy matchup over eight rounds.

Jones Jr.’s Russian manager and business partner Zsolt Barna admits that although the fight is listed as an exhibition, the two men are “not kids any more” and will be going all out to win the WBC Frontline Battle Belt, made especially for the dust-up between the two veterans.

“I was sitting next to Roy when they had a discussion with Mike and his people and of course they agree it’s going to be an exhibition fight,” Barna told Rt Sport in a video interview. “Don’t forget both of them are in their 50s; Mike is 54, Roy is 51, although both of them you know – one of the greatest. Roy and Mike, who knows which ones better?

“Thing is this – although it’s an exhibition fight – we know Mike had exhibition fights before and you never know which Mike you’re gonna get when he gets into the ring. You just never know. Let me put it this way – Roy is very smart, he’s very intelligent, his ring IQ is really up there that being said he’s ready for anything.

“Mike is an unbelievable fighter, probably one of the greatest heavyweights ever. The most exciting. I don’t want to say greatest ever but definitely the smallest and the most explosive heavyweights in history. He knows one speed – he comes there to knock you out. He comes there to hurt you. Roy has many KOs as well. But Roy is very smart and he’s ready for anything.”

Recent reports suggested that the two fighters would adhere to rules that prevented either being knocked out, and no winner would be declared, making the fight a true exhibition.

Both men have trained diligently in the lead up to the match, Tyson particularly has stunned fans with his hulking physique which doesn’t show any signs of having ages since his heyday in the 1980s and 1990s, attested to by Tyson’s admission he now weighs 215 lbs, a weight not attained since his days as a young pro.

Barna also revealed that a fight was intended to be made between the two in 2003 when Jones stepped up to heavyweight to win the WBA from John Ruiz, and Tyson was coming to the end of his career, although the different trajectories of their respective careers meant that their paths never crossed. Until this Saturday.

“So as far as the fight goes yes its an exhibition but – there’s always a but – that’s why it’s very interesting. Many people don’t know that this fight was supposed to happen before. when Mike was retiring and Roy just won the heavyweight title beating [John] Ruiz and there was a fight on the table.

“Mike is not afraid of anything or anybody but he was done with pro boxing and that’s why that fight never happened. But we believe it’s going to be very exciting. Even if it’s an exhibition it’s gonna be the biggest show of 2020. Because of Covid, and all the things we were facing in the world.”

Tyson was famed for his timeless soundbites, priceless trash talking and outright malicious threats during his career, but he also uttered many significant musings before fights to express his judgement on an opponent, including the now infamous paraphrased line: “everyone has a plan until they get punched in the mouth”. With those words in mind, what exactly is Jones’ plans about facing a man known for scrambling the plans of scores of top heavyweights?

“Roy is ready for anything and everything. When he gets into the ring for him he’s very intelligent he knows that if he’s gonna end up staying there toe to toe with the baddest man there’s a chance he’s gonna get hurt,” Barna revealed. 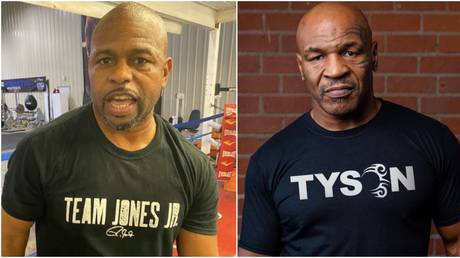