Close
Trending News
HomeSportTwo strikes and you’re out: Teams with TWO positive coronavirus cases will be BANNED from the Tour de France

Two strikes and you’re out: Teams with TWO positive coronavirus cases will be BANNED from the Tour de France

Two strikes and you’re out: Teams with TWO positive coronavirus cases will be BANNED from the Tour de France

The spectre of COVID-19 looms large over the teams preparing for the Tour de France, with team staff confirming that organizers will rule out any teams with two or more positive cases of coronavirus.

The news that teams with two positive cases would be removed from the field was first reported by cycling news site Velonews, and their story was subsequently confirmed to news outlet Reuters by two team directors ahead of the race.

“The measure was announced to us at the Criterium du Dauphine,” one unnamed sports director told Reuters.

The Criterium event is run by the same team that organizes the Tour de France, and it has been confirmed that the teams, including riders and staffers, will have to be contained within a bubble upon their arrival in Nice for the Grand Depart on Saturday

Each rider and staffer will be tested twice before the start of the race, and a mobile testing lab will be set up to conduct regular tests.

The director of the Tour de France, Christian Prudhomme, said earlier this week that a rider that tests positive would have to isolate, along with their roommate, but it would not force the abandonment of the event.

But the latest reports say that if a team has two confirmed cases within their ranks, that team will be removed from the Tour.

To date there have been no reported cases of COVID-19 within the professional peloton since the resumption of the season in late July. 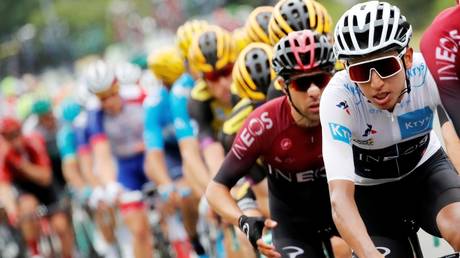