Everton’s Turkish international forward Cenk Tosun says that he was simply “pointing to the sky” after claims that he used a controversial far-right gesture in a goal celebration on Saturday.

Tosun seized on a free-kick from Colombian star James Rodriguez to send the ball past Rotherham’s Jamal Blackman in their FA Cup tie, in a strike which was subsequently ruled out by VAR.

But if the goal being chalked off by the television match officials was a moment of controversy, so too was the celebration offered by Tosun in its immediate aftermath.

It was claimed by some that Tosun made a gesture with his left hand in recognition the Turkish far-right extremist group the Grey Wolves – an allegation that the 45-times capped international denies.

Wow if this is what it looks like Cenk Tosun should never play in an Everton shirt again. This club and this city have history fighting fascism, can’t let it seep in through the back door. pic.twitter.com/vC5eERFLPa

The Grey Wolves are a neo-fascist group based in Turkey, while also thought to be the largest ultra-nationalist extremist organization in Germany. They were banned outright by the French government last year.

Everton officials said after the game – which they won 2-1 – that they had spoken to Tosun about his post-goal pageantry, saying that the player informed them that he was “celebrating and pointing to the sky” and that any links to a far-right group are entirely off the mark.

Everton striker Cenk Tosun held up the symbol of the Turkish fascist group “Grey Wolves” today. If the FA are serious about kicking racism out then they can’t turn a blind eye to this. pic.twitter.com/C2sO2y8X7W

It is not the first time that makes provactions with a military sign. Remember the match october 11th 2019 Turkey-Albania.

Everton’s assistant manager Duncan Ferguson told the media after the game that he didn’t see Tosun’s celebration and couldn’t pass comment on it.

However, some Everton fans weren’t quite as quick to dismiss Tosun’s celebration.

“The FA needs to punish him. This is shocking!” one fan wrote online.

“At the end of the day, fascist or not, sell Cenk Tosun,” another declared. “He’s f***ing terrible.”

Despite having the strike ruled out, Tosun did end his 14-month goal drought in the game when he gave The Toffees a 9th-minute lead in the FA Cup third round game. Matthew Olosunde levelled proceedings shortly after half-time before Abdoulaye Doucoure secured Everton’s passage to the fourth round with a 93rd minute winner. 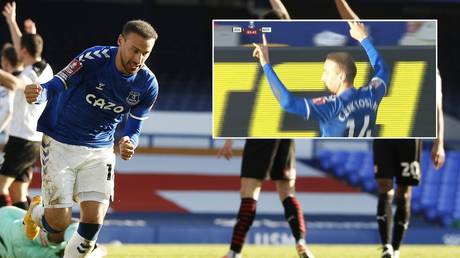