Eddie Alvarez was defeated by DQ in his first fight in 20 months after landing a flurry of illegal strikes on opponent Iuri Lapicus, as fellow UFC alum Demetrious Johnson was also finished for the first time in his career.

Former UFC champions Alvarez and Johnson were high-profile additions to the ONE Championship roster in 2018 but both men had moments to forget at Wednesday night’s fight card from Singapore.

I’d like to congratulate Iuri Lapicus for passing my acting class with flying colors. Tonight was a beautiful performance. May the world forever troll you. Welcome to the club! #ONEonTNT1 #ONEChampionship

Alvarez, who was famously defeated by Conor McGregor four years ago inside Madison Square Garden as the Irishman added a second UFC world title to his collection, has designs on earmarking himself as one of the premiere lightweight fighters in the sport’s history by adding the ONE title to the UFC and Bellator iterations already in his trophy cabinet.

However, his bid suffered an ignominious setback against Lapicus after his disqualification loss for landing punches to the back of Lapicus’ head – after which the Moldovan fighter was deemed unable to continue and later taken from the cage on a stretcher.

The ending was as fast as it was controversial. Alvarez secured an early takedown against the cage and soon began raining down blows on the helpless Lapicus, but the referee adjudged that several of the strikes landed behind the ear – quickly stopping the action and issuing Alvarez with a red card, the Asian promotion’s signal for a disqualification.

Reacting online, current UFC champ Aljamain Sterling – who defeated Petr Yan by disqualification last month after receiving an illegal strike of his own – trolled Lapicus, joking that “I’d like to congratulate Iuri Lapicus for passing my acting class with flying colors.“

Alvarez is choking up in his post-fight interview. As always, he is real as it gets.

That felt like a veteran who has seen and done it all and is getting tired of seeing it all. The bad stuff. Appreciate his honesty in that moment, and I think he deserved better.

“Iuri was turning his head the other way and the referee warned me, he said to me ‘back of the head, Eddie’,” Alvarez said afterwards.

“So you see me take my head and I start shoving his head towards my punch. You’ll see it in the tape. When the ref warns me, I take my own head and I push Iuri’s to the side of the punch that it was coming. On top of that, I felt like as long as I’m hitting the ear at some point that it’s legal.

“The referee’s here, whatever call he makes, that’s the call. I apologize. I hope Iuri is totally fine cause this game is so dangerous. All I care about is that everybody in here sincerely is safe and can go home to their family when they’re done. I’m praying for Iuri right now.”

Knees to a grounded opponent are legal in @ONEChampionship ! It is the best rule ONE has

But if the night wasn’t a good one for Alvarez, it was worse for former top-ranked pound-for-pound fighter on the planet, Demetrious Johnson, who was finished for the very first time in his career by Brazilian flyweight champion Adriano Moraes.

‘Mighty Mouse’ had won all three of bouts under the ONE banner thus far but came up short against Moraes, who harnessed the different ruleset adopted by many Asian promotions to land a shuddering knee to the downed Johnson which knocked out the American midway into the second round for what was just the fourth loss of Johnson’s 35-fight career.

Heres the thing you cant stall the fight by sitting on your knees. Knees to a grounded opponent should be allowed!

Ironically, Johnson’s defeat came a month to the day after he endorsed ONE’s move to allow knee strikes on the ground, after writing on Twitter in March: “Here’s the thing you cant stall the fight by sitting on your knees. Knees to a grounded opponent should be allowed!“

“I’ve got to go back home and look at the fight to see where I made the mistakes,” said Johnson as he evaluated his performance.

“He’s very long, big, I was trying to get to him but it’s part of the game. You’re in the game so long, it’s bound to happen one of these days.“

Both Johnson and Alvarez’s legacies in mixed martial arts are all but secured regardless of the results of their most recent fights – but with both of their losses coming as a result of kinks in the rulesets which govern ONE Championship (compared to North American mixed martial arts) both might be wondering if the decision to abandon the UFC at the height of their careers was the best move for them. 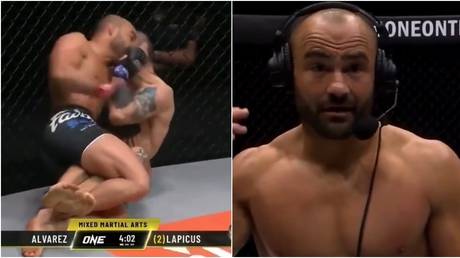