“I feel better under the water than on the Earth” Timanina said in a caption accompanying the video, which she shared on her Instagram page.

The 31-year-old was immediately compared to a mermaid by her followers, who flooded her page with words of praise and admiration.

Timanina was one of Russia’s golden girls, captaining the team to Olympic glory at the London 2012 Games in a career which also saw her amass an incredible 11 world titles.

She eventually retired from the sport in 2016 after battling injury, but has since found a new passion – and another chance of Olympic glory – in the form of surfing.

Timanina has a growing following of 117,000 on Instagram, with much of her social media output featuring her surfing exploits and modeling pics. 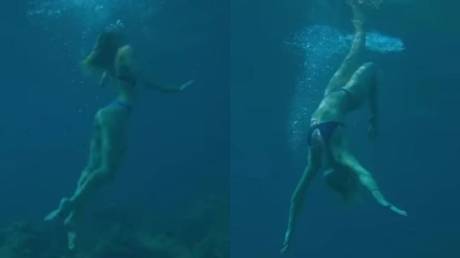