The Australian cricket team will take part in a large-scale ‘barefoot’ anti-racism protest ahead of the opening One Day International test against India, though some fans are bemused by the decision.

The barefoot circle, as it is called, is a nod towards the ongoing anti-racism movement in global sport and acknowledges First Nations people – those who are indigenous to a particular area – as well as supporting the ‘Black Lives Matter’ campaign. It comes after senior figures within the Australian team opted to demonstrate support for social issues such as this.

Cricket Australia stated in a ‘diversity and inclusion’ statement that the barefoot circle is intended to “acknowledge the traditional owners of the land.”

Previously, the Australian team and their coach, Justin Langer, had come under fire in the media for failing to take any such action during September’s series against England, with batsman Aaron Finch saying that he felt education on the matter was more important than protesting.

However, West Indies legend Michael Holding hit out at the perceived racial inaction, describing as “lame” the team’s decision to not take a knee ahead of the games with England. Langer subsequently acknowledged that he and his side could have done more in solidarity with the movement – which has led to the decision to take part in the ‘barefoot circle’.

However, sports fans have expressed mixed reactions to the Australian team’s decision to take part in racial equality protests – with some saying that the act of solidarity is a necessary move, while others object and say that matters such as this should be kept separate from sport.

A few years ago when an Australian tour to Pakistan was cancelled, players and administrators went to great lengths to separate politics from sport. Now they trip over themselves with all the virtue signalling they can muster.

End racism, fine. But BLM is an anti-family , Marxist violent group that isn’t interested in peace at this stage. See how they operate in the US. Also, when will it be acknowledged that non whites can also be racist? It’s not a one way street

That’s me. I’m done. Will never watch this side again .

“It‘s probably a decision for the players to be heavily involved in because they’re the ones who will have to own the decision if they decide to take a knee,” Australian netball star Liz Ellis told local media of the cricket team deciding not to take a knee.

“You either make the decision to take a knee or you don‘t. You don‘t need to rely on an Indigenous person to educate you. Go and educate yourself.

“It‘s a players’ issue. The board can’t tell players to take a knee or not take a knee.” 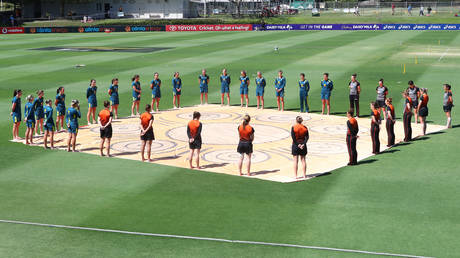