The LA Lakers fell to a second straight defeat to open the season on an eventful night at the Staples Center, where a fan was ejected after clashing with Rajon Rondo and tempers flared between Anthony Davis and Dwight Howard.

The Lakers lost 115-105 to the visiting Phoenix Suns, continuing their winless start to the new season after their opening-game defeat to the Golden State Warriors.

Friday night’s action was marred by ugly scenes on the sidelines between Lakers’ teammates Davis and Howard as tempers flared during a timeout with the home team behind in the second quarter.

Footage showed Howard rising from his chair as Davis loomed over him, with Davis then grabbing his teammate by the elbow and appearing to attempt to force him back down.

Anthony Davis and Dwight Howard got into it and had to be separated by their Lakers teammates 😳pic.twitter.com/fyfxBtf0oO

Coaching staff and fellow players including LeBron James scrambled to try and defuse the situation, before Davis returned to the floor and Howard remained on the bench.

“It’s over with… You can look at it how you want. In house, what we do in the locker room, what we say, we keep it to ourselves. Me and DH talked about it, and we keep it at that…”

AD and Dwight got into it during a Laker timeout 😬 pic.twitter.com/9TULGs7DeE

“Something happened, he was saying one thing, I was saying another on the scheme.

“One thing led to another. We talked about it, and we left it in the locker room at half time.”

Howard later echoed those sentiments, saying the pair had “squashed” the issue.

“We’re grown men, things happen…that’s my brother and I don’t want anyone to try to make this an issue.” @DwightHoward with @LakersReporter on the incident on the bench with Anthony Davis. #LakeShow pic.twitter.com/sj6gxzde5s

However, the drama wasn’t done there.

Fellow Lakers star Rondo was seen clashing with a fan on the sidelines toward the end of the third quarter during a delay as attendants cleaned up a spill next to the court.

It’s unclear what led up to the incident, but the 35-year-old Rondo was seen appearing to make a gun gesture towards the fan’s head (in the bottom left of the clip below).

Lakers are now fighting fans 2 games into the season pic.twitter.com/HomZC7OvTD

The man eventually slapped Rondo’s hand away and was seen being ejected from his seat.

Rajon Rondo appears to be making a gun gesture in a courtside fans face. The fan pushes his hand away & gets rejected from the game 👀 pic.twitter.com/01jCkkLyNM

This fan got ejected from the game after touching Rajon Rondo pic.twitter.com/S7950sMLzP

Online, fans, former players and pundits reacted to the combustible scenes at the Staples Center.

“Dwight Howard and AD got into a physical altercation on the bench…in my 42 years of being associated with the Lakers organization, I’ve never seen something like that smh,” wrote the NBA legend.

Dwight Howard and AD got into a physical altercation on the bench…in my 42 years of being associated with the Lakers organization, I’ve never seen something like that smh

As if this night wasn’t ridiculous enough, Rajon Rondo just got a courtside fan kicked out after the two were going back and forth.

This is some embarrassing stuff being displayed by the @Lakers. They are down by 30. They’ve been outscored in the paint 46-8. Teammates are fighting with each other and nobody can hit a damn jump shot. It’s only Game 2 of the season, but damn! Plus, the effort sucks!!!

This is the first time the Lakers have ever started a season 0-2 with both losses coming at home.

Lakers talisman James suggested after the game that frustrations had been fueled by a number of calls going against his team.

“That side, the emotional side, got to us tonight,” said James.

“That’s what happens when you’re trying to get over the hump and play perfect basketball. But we have no choice but to get better.”

The Lakers – NBA champions in 2020 – lost all six of their pre-season games before opening the season at 0-2, and next host the Memphis Grizzlies on Sunday, when they will hope for calmer heads and a better result. 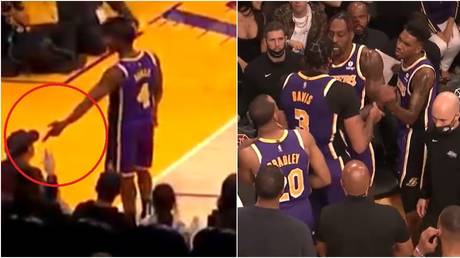