Top spin: Tennis No.1 Djokovic continues charm offensive by talking Russian to next opponent after sweeping at French Open (VIDEO)

Top spin: Tennis No.1 Djokovic continues charm offensive by talking Russian to next opponent after sweeping at French Open (VIDEO)

Novak Djokovic has called fourth-round opponent Karen Khachanov his “brother” in the number 13 seed’s native Russian on Instagram, having helped to sweep a French Open court as he continues to attempt to forget his US Open shame.

Moscow-born Khachanov was teased by the Serb after expressing his pleasure at easing into the final 16 of the tournament in Paris, setting up a shot at a second victory in five attempts against one of the greats of tennis.

The world number 16 will be a heavy underdog when he faces one of the favorites for the title tomorrow, and the pair shared a playful exchange on Instagram before their serious business begins.

“Ok, brother,” Djokovic wrote in Russian after Khachanov had celebrated his passage to the second week of play at Roland-Garros.

If tennis doesn’t work out, we have a job for you @DjokerNole 😉 🧹#RolandGarros pic.twitter.com/B56ubcRQSS

He tries soooo hard to be likeable. He is so fake it’s beyond cringey 🤮

He then switched to English to ask: “Who do you play next?”

The 24-year-old jokingly replied: “Like, Djokovic – heard about this?”

Djokovic has not been universally popular with his fellow players this year. He drew fierce criticism from the likes of outspoken Australian Nick Kyrgios for his doomed Adria Tour events as the coronavirus pandemic spread across Europe, and was questioned by top stars including Rafael Nadal and Roger Federer over his subsequent plans to form what appeared to be a breakaway players’ union.

He will be praying for a far smoother experience against Khachanov than he endured in the final 16 at the US Open last month, when he was disqualified in disgrace from a tournament he had been expected to win after hitting a line judge with a ball.

Getting some good will credit back after the little episode in NY.

He is a great player no doubt probably will surpass tRoger and Rafa’s achievements in the near future but I don’t think he’s got the charm to be liked by the masses.

Lame attempt to rehab his image in wake of his default at the US Open.

In his first Grand Slam since his ignominious exit in New York, Djokovic was keen to portray his light-hearted side for the cameras as he helped ground staff sweep the clay court in weather conditions that have often been difficult for organizers and players.

Djokovic mimed sweeping the surface with his racket before gleefully accepting a broom that was offered to him by one of the nearby members of staff in an incident picked up by the tournament’s official Twitter account.

“‘Please, people, like me – I am so much fun, episode 3,7366277’,” one cynic claimed that Djokovic had been pleading with his charm offensive.

Another said: “He is a great player, no doubt, [and will] probably surpass Roger and Rafa’s achievements in the near future.

Not a huge Djokovic fan but gained a lot of respect when he stopped the match after his opponent slipped. Good move👍🏻

But no mask, and no hand sanitizer…….has he not learned anything !!??!

This guy is so ridiculous

Hes so great. People should remember that

“But I don’t think he’s got the charm to be liked by the masses.”

Contender Khachanov lost his only previous Grand Slam meeting against Djokovic with a straight sets fourth-round defeat at Wimbledon 2018.

He has not won a set in any of his three losses to the 2016 winner, but he beat Djokovic in straight sets on a hard court in Paris two years ago, winning 7-5, 6-4 at the ATP Masters. 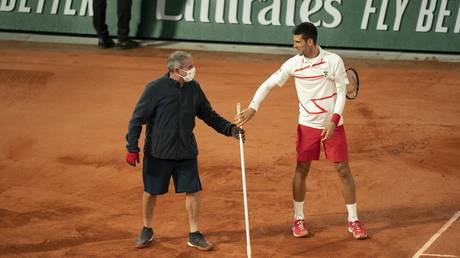