Leading 800m runner Nelly Jepkosgei has been banned for three years after a bizarre bid to dodge a drugs sample, telling testers that she had rushed to be with her hospitalized sister before concocting fake signatures and papers.

The 29-year-old’s husband told doping officers that she was with her sister in hospital when they visited Jepkosgei’s home to carry out a test, adding that she would return within the required one-hour window.

After the middle distance athlete did not return in time, her representative sent an email to the Athletics Integrity Unit enclosing purported confirmation of the accident, explaining that her sibling had “remained there for some days” and that “the hospital could not do any other letter”.

When officials contacted Kenyan police, they were told that there were no records of the alleged crash.

Middle-distance runner Nelly Jepkosgei of Bahrain has been banned for three years having accepted a charge of tampering, a violation of the @WorldAthletics Anti-Doping Rules.
👁️⬇️https://t.co/cBkQOqSHT4 #AIUNews
1/2 pic.twitter.com/HbhTRiLHKS

Kapsabet County Referral Hospital then confirmed that the documents had been forged and said that the doctor’s name and signature on the discharge summary did not belong to any of the hospital’s staff.

In the ruling over the ban for tampering with the anti-doping process, adjudicators revealed that Jepkosgei’s rep had told them: “As mentioned in the previous email, when Nelly heard that her sister had an accident she rushed to the hospital, without think[ing] about her whereabouts [be]cause she was very worried for her sister.”

Jepkosgei’s ban was reduced by a year because she later admitted to faking the evidence.

The holder of Kenya’s 1000m record hasn’t competed since 2019. She was in the process of switching citizenship from Kenya to Bahrain and was expected to be eligible to represent her new country in August. 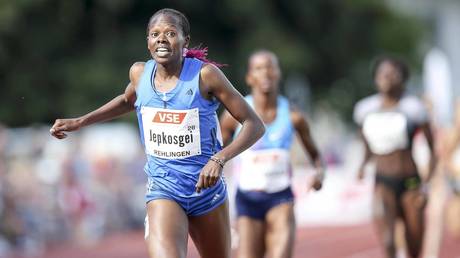