With Paul Felder trading his commentary role to instead fight in this weekend’s UFC main event, RT Sport delves into the archives to focus on five of the most memorable short-notice fights in MMA history.

A noted philosopher once stated: “Do or do not. There is no try“. And while those words were uttered by the fictional “Star Wars” character Yoda, it doesn’t make them any less meaningful – especially when applied to mixed martial arts.

As fight fans have no doubt become accustomed to over the years, perhaps no other sport can present quite as many twists and turns and this one, but it isn’t just what happens in the cage itself that we find so compelling, because sometimes what happens in the days before a fight can be equally dramatic.

With the UFC now hosting numerous fights cards each month, this inevitably leads to more than a few bouts being affected by injury, illness or the myriad other factors that can decimate a fight card.

The UFC, though, very much operates a “next man up” policy in these situations, which often leads their matchmakers to scour the roster to identify someone, anyone, who might be able to fill the gap.

And, as history has taught us over the years, this has sometimes led to some of the octagon’s most dramatic moments.

Newly-minted UFC middleweight champion Luke Rockhold was expected to face the man beat to win the title, Chris Weidman, in the first defense of the title.

Enter Michael Bisping. The veteran Englishman was coming off a career-defining win against Anderson Silva but had been beaten relatively convincingly by Rockhold less than two years prior.

But if Rockhold won that battle, Bisping was going to win the war after the betting underdog connected flush with a first-round left hand that sent Rockhold stumbling backward. A few follow-up shots later, Bisping was the undisputed middleweight champion and the nickname “Left Hook Larry” had been born.

This wasn’t in the script. McGregor, just removed from a sensational 13-second knockout of Jose Aldo to claim undisputed UFC featherweight gold, was expected to challenge then-champ Rafael dos Anjos for the lightweight title before a broken foot forced the Brazilian’s exit.

The UFC tapped Aldo and then Frankie Edgar to step in, but neither man was able to step up. The next call would alter the course of UFC history.

Nate Diaz, coming off a spectacular performance in a victory against Michael Johnson after which he goaded McGregor by saying that the Irishman was “taking everything he [worked] for“.

That set the narrative for the fight and then, less than two weeks after agreeing to the fight, Diaz emphasized his point by choking McGregor into submission in the center of the cage in the MGM Grand Garden Arena. It remains one of the most dramatic finishes in UFC history.

The sole non-UFC entrant on our list applies not just because of the extremely short notice nature of the fight, but also the fact that it is credited with killing the promotion in which it took place.

Some 12 years ago, back in the sepia-toned days of MMA, internet street brawler Kimbo Slice was making his first moves into mixed martial arts. Having learned some of the basics under the tutelage of former UFC champion Bas Rutten, Slice – real name Kevin Ferguson – was placed in a fight against the aging Ken Shamrock – a fight that was intended to add more luster (and a recognizable name) to his list of knockout victims.

Instead, Shamrock suffered a cut to his forehead backstage while warming up for the fight – prompting EliteXC officials to scramble to locate someone to step in on mere hours’ notice. Eventually, they settled on former “The Ultimate Fighter” competitor Seth Petruzelli, who promptly KO’d Slice just 14 seconds into the first round.

Just 16 days later EliteXC announced that they had ceased operations after announcing significant debt, as well as a Florida State Athletic Commission investigation into the allegations surrounding the controversial Slice-Petruzelli fight.

If McGregor’s second opponent sourced on 11 days notice, Nate Diaz, didn’t quite work out for him, his UFC 189 meeting with Chad Mendes – in which the American was introduced also just 11 days beforehand – led to the Dubliner claiming his first UFC title.

McGregor, at this point still a rising star in the sport, was awarded his first UFC title shot after an impressive sequence of wins against Max Holloway, Dustin Poirier and Denis Siver, and was expected to fight Jose Aldo for the featherweight title at the UFC’s tentpole UFC 189 event.

However, Aldo withdrew due to a rib injury and was soon replaced by Chad Mendes who, according to his trainers, hadn’t been in full training mode.

After a bright start by the American, Mendes’ lack of conditioning showed and McGregor took control towards the end of the second, finishing the fight with an arcing left hand against the fence.

The win confirmed McGregor as the interim UFC featherweight champion – something he would upgrade to the undisputed version months later against Aldo.

Truthfully, the fight in which Khabib Nurmagomedov finally won UFC gold could have come against any one of several opponents.

Khabib was slated to fight Tony Ferguson (where have we heard that before?) in New York for the lightweight title recently stripped from Conor McGregor, but with Ferguson pulling out from the fight just days out due to a freak fight-week injury, the UFC turned to then-featherweight champion Max Holloway as a replacement.

However, on the day of the weigh-ins, Holloway was deemed medically unfit to fight. They then turned to Anthony Pettis, who was unable to make championship weight by just 0.2lbs. Next Paul Felder was considered but the New York Athletic Commission stepped in to object because “The Irish Dragon” wasn’t a ranked fighter at the time.

Finally, the UFC settled on Al Iaquinta, who had been preparing to fight Felder on the same card. Despite Iaquinta also missing championship weight by 0.2lbs, Dana White noted that the promotion would consider him champion if he was able to defeat Khabib.

He wasn’t. He did manage to last the full 25-minutes with the undefeated Russian in the process – but unlike another man on this list, Michael Bisping, that fairytale knockout never came. 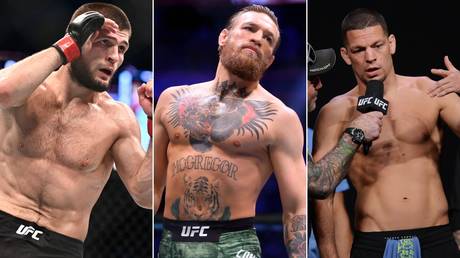