‘Tokyo, I’m coming back in 2021’: Floyd Mayweather set for another big-money ring return in Japan

‘Tokyo, I’m coming back in 2021’: Floyd Mayweather set for another big-money ring return in Japan

Undefeated boxing legend Floyd Mayweather will compete in a bout in Japan in February 2021, it was revealed on Monday, but details as to the opponent – or even the type of fight it will be – have yet to be revealed.

Mayweather has competed just once in an exhibition fight with Japanese kickboxer Tenshin Nasukawa since ending his professional boxing career in 2017 with a 10th-round TKO win against UFC standout Conor McGregor, and the 43-year-old has repeatedly teased returns to the ring in the years which have followed.

The 50-0 star was expected to fight in some capacity this year but plans to do so were waylaid by the onset of the coronavirus pandemic, but his return to action appears a step closer after organizers of an event called ‘Mega 2021’ which will be held at the world famous Tokyo Dome on February 28.

Promoters for the event said that ‘champion-class’ fighters will compete on the card, Mayweather included, but stopped short of detailing the specifics as to who he might face, as well as the ruleset under which the proposed fight will take place – and comes after Mayweather teased details of his comeback this week on Instagram.

“Tokyo, Japan, I’m coming back, in 2021,” Mayweather said in a video post. “I know the Olympics is in Japan in 2021, but me, myself, Floyd ‘Money’ Mayweather and my team will be doing something big in Tokyo Dome… Japan, I’m on my way.”

The bout will represent the second time that Mayweather will have competed in Japan in recent times after he easily beat Japanese star Nasukawa, earning $9 million (£6.8 million / €7.6 million) for less than one round of action.

Despite being officially retired since 2017, Mayweather remains the biggest draw in combat sports, reportedly earning close to $800 million (€676 million / £606 million) throughout his career.

Attention will now turn to the identity of Mayweather’s opponent. UFC stars McGregor and Khabib Nurmagomedov have frequently been linked with Mayweather in the press for much of the last couple of years, but language in their respective UFC contracts suggests that Dana White and co. could present a significant stumbling block for any potential plans.

But however this shakes out, the Japanese event’s promoters will surely be aware that the man nicknamed ‘Money’ certainly won’t come cheap. 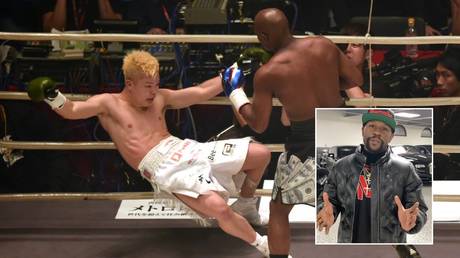