Toke-n gesture: Mike Tyson and Roy Jones Jr ‘WON’T be tested for marijuana use’ before comeback showdown on November 28

Toke-n gesture: Mike Tyson and Roy Jones Jr ‘WON’T be tested for marijuana use’ before comeback showdown on November 28

Boxing icons Mike Tyson and Roy Jones Jr will not be subjected to drug testing for marijuana ahead of their much-hyped comeback showdown in California later this month, according to reports.

Tyson and Jones Jr – who boast a combined age of 105 – meet in a heavyweight exhibition bout at the Staples Center on November 28 as the pair step out of retirement.

Some details of the contest have already been confirmed, such as the prize on offer in the form of a specially created ‘Black Lives Matter’ belt commissioned by the WBC.

The two boxing legends will fight without headgear, but their eight rounds will be truncated to two minutes each for safety reasons.

While the California State Athletic Commission has approved the fight, it will not be scored by any of the state’s judges, no knockouts will be allowed and no winner will be formally announced by the commission, according to Boxing Scene.

The pair will be tested by the Voluntary Anti-Doping Association (VADA), but marijuana won’t be included in the checks, according to Boxing Scene sources.

That will likely be welcome relief for Tyson, who is well known for his weed indulgence and has claimed he and his team get through $40,000 of marijuana every month at his ranch in California.

Tyson did admit to Joe Rogan in the build-up to the fight with Jones Jr that he had drastically cut down on his consumption of the drug.

“[I’ve] pretty much stopped [smoking cannabis]. When you do something like this it’s all about change,” Tyson said.

The 54-year-old heavyweight star last stepped between the ropes to face Kevin McBride 15 years ago, being forced to retire after the sixth round in what was a sad end to a once-great career.

The 51-year-old Jones Jr, who holds Russian as well as American citizenship,  last fought in 2018 when he defeated Scott Sigmon in Florida, improving his career ledger to a remarkable 66 wins from 75 contests. 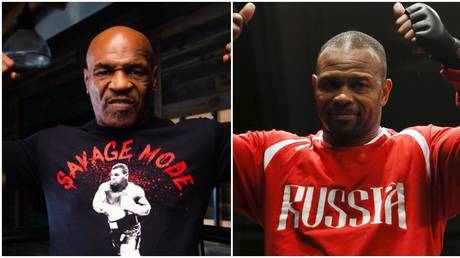 Police use water cannon against pr...