Close
Trending News
HomeSportTitle with Chelsea would be ‘worth more’, says German star Havertz after being snapped up by Abramovich despite Real Madrid links

Title with Chelsea would be ‘worth more’, says German star Havertz after being snapped up by Abramovich despite Real Madrid links

Title with Chelsea would be ‘worth more’, says German star Havertz after being snapped up by Abramovich despite Real Madrid links

German midfield sensation Kai Havertz says a title win with new club Chelsea would ‘be worth more’ than elsewhere following his big-money summer arrival in London, where he landed despite interest from the likes of Real Madrid.

Havertz, 21, cost the Blues around £71 million ($93 million) when he joined from Bayer Leverkusen at the start of September, as part of a summer spending spree from Chelsea owner Roman Abramovich which easily topped the £200 million mark.

The German attacking midfielder arrived at Stamford Bridge as one of the most sought-after stars of his generation, as Chelsea reportedly beat rivals such as Spanish giants Real to his signature.

Speaking on signing for Frank Lampard’s men, Havertz said the “vision” of the club and the array of talent they have assembled was key in his move.

“It was important for me to have a club with a vision. An exciting change is taking place,” he told Sport Bild, as reported on the Chelsea website.

“A transfer like this doesn’t happen overnight. I had to go through all options and things that are important to me. I was watching a lot of Premier League football on TV so I knew Chelsea really well.

“We’re a young team with many great players and we think offensively. We want to build something and attack, which motivates me a lot. A title with Chelsea is just worth a lot more.”

Havertz has struck four goals in 10 appearances for his new club, including a hat-trick against Barnsley in the League Cup.

His form in the Premier League, where he has a solitary goal and two assists to his name, has been patchier as he continues to bed into a team alongside new arrivals such as countryman Timo Werner.

A Covid-19 infection ruled Havertz out of Chelsea’s last game before the international break when they enjoyed an impressive 4-1 win over Sheffield United.

The sense is that he will come good despite taking time to adapt to his new footballing environment, as Lampard’s team pick up momentum with 15 points from their eight league games this season, enough to put them fifth in the table, three points off the top.

Havertz cited Chelsea manager and former free-scoring midfielder Lampard as being a major factor in his decision to join the Blues.

“I was always impressed with his scoring threat. I found that outstanding for a midfielder. That’s what I want to measure myself against,” the youngster said.

“The fact that he was so successful and at the same time so personable impresses me.”

Linking up with fellow German international Werner, 24, has undoubtedly helped Havertz settle into life in West London – both on and off the pitch.

“I help Timo with good passes on the pitch and, at the beginning, he helped me out with a lift to the training ground,” Havertz said.

“We do a lot of things together and this helps a lot but we also have to do our own things to fully settle here. For me, the move to England is also an important step for my personal development.”

The pair are just two of a small legion of new stars to join Chelsea, with Brazilian center half Thiago Silva proving a revelation since he joined as a free agent after leaving Champions League finalists Paris Saint-Germain.

READ MORE: ‘Finally a keeper who can SAVE’: Roman Abramovich watches on as new No.1 Mendy stars for Chelsea in Champions League win in Russia

Wingman Hakim Ziyech, signed from Dutch masters Ajax, has also come into the side following injury and made an instant impact with his passing range. The Moroccan wizard has registered two goals and three assists in his seven games for Chelsea thus far. 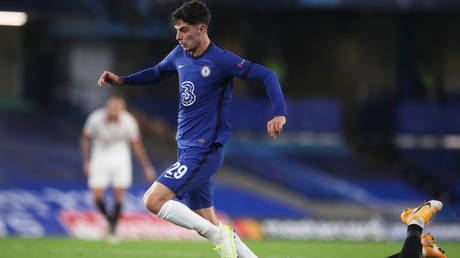 Boris Johnson and his team accused...