Petr Yan’s triumphant world title victory against Jose Aldo at UFC 251 has been immortalized on the streets of St. Petersburg with a picture-perfect mural of Russia’s latest UFC champion.

Yan joined Khabib Nurmagomedov as one of just two Russian titleholders in the world’s largest mixed martial arts promotion when he earned a stoppage late in the fifth round of his “Fight Island” bout with MMA icon Aldo – and it didn’t long for his achievement to be recognized by the Russian artistic community.

The mural shows the 27-year-old Yan draped in a Russian flag while holding his gloved fist aloft, alongside the words “And new…“

Writing of the mural on Instagram the group responsible, sbpcolors, said, via translation: “Congratulations Petr Yan [for the] victory!

“We follow his work from the time when it was not yet mainstream! Petr masterfully deals with his rivals, like a real artist with a canvas. It’s nice to give gifts to such great people! Respect for the victory!“

Meanwhile, Yan’s status as UFC bantamweight champion has already lead to a host of his divisional rivals trying to engineer a fight with the division’s new top dog.

One such fighter is former 135lbs champion Cody Garbrandt, who wrote on Twitter that Yan is “too slow” for him.

Yan’s riposte was simple, accompanied by a laughing emoji: “And you are too dumb, no chin.” 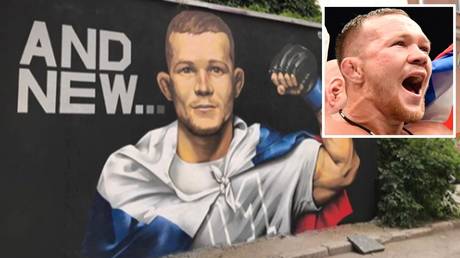