The car bearing President Donald Trump’s name on the NASCAR circuit has stated that it has ‘no choice’ but to stick with Goodyear tires after Trump called for a boycott of the Ohio-based company on Wednesday.

Corey LaJoie has driven the ‘Trump 2020’ car at numerous races this season, with it’s MAGA-inspired decals coming as a result of a sponsorship deal between his team, Go Fas Racing, and a political action committee called Patriots of America which supports Trump’s 2020 re-election campaign, and while he says he is generally supportive of Trump’s policies, the deal that NASCAR has in place with Goodyear means that he has no choice to but use the brand which is currently in the White house doghouse.

“We just have one way to run them,” Go Fas Racing general manager Mason St. Hilaire told US media.

“It’s either those tires or no tires. We don’t have much of a choice. There should be two. I don’t know if you should just have one. You’ve got to keep something for the competition, right? Putting another one in would probably be a little bit of fun, both for cost and competition.”

Trump’s ire at the tire brand can be traced to a re cent announcement in which they barred employees from wearing any political messaging at work in the lead-in to the US Presidential election in November, with The Donald’s squarely framing the situation as a ban on his popular brand of red MAGA hats. Indeed, political messaging in opposition of the Trump administration was also outlawed.

Don’t buy GOODYEAR TIRES – They announced a BAN ON MAGA HATS. Get better tires for far less! (This is what the Radical Left Democrats do. Two can play the same game, and we have to start playing it now!).

NASCAR has yet to comment on the situation. The car racing league also came under fire from some sections of its support earlier this year when a ban on fans flying confederate flags are their races was announced in the wake of the wave of ‘Black Lives Matter’ protests following the death of George Floyd in May.

It should also be noted that Trump’s presidential limousine uses Goodyear tires.

Who wants to tell him. pic.twitter.com/cMrvwxbpm1

NASCAR and Goodyear extended their partnership 2017, some 20 years after first linking and has become the most popular tire brand in the United States – and one of the most popular in the world.

Goodyear is based in Akron, Ohio and employs almost 70,000 workers – around a thousand of which are US military veterans.

Meanwhile, Go Fas Racing’s St. Hilaire has expressed his reluctance at being central to an ongoing political debate.

“You’ve just got to look at all the information, I guess, you look at both sides,” he said. “It doesn’t look like whatever was out there on the internet came from corporate. It looks like maybe it was some sort of independent-type form that came out. It’s unfortunate. How does that even get out there? I feel bad for Goodyear to deal with this stuff with everything going on right now. In a competitive atmosphere, if you had two different ones, you’d play who’s stronger.” 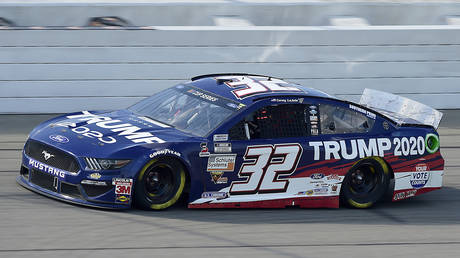