UFC welterweight contender Stephen “Wonderboy” Thompson has his theories on why Khamzat Chimaev seems to have the full weight of the UFC’s marketing machine at his back, and it involves the retirement of Khabib Nurmagomedov.

Perhaps no fighter has seen their star shine quite as much this year as Chimaev. In the summer, the Chechen-born Swede was one of several unheralded names drafted in to make their debuts as part of the UFC’s sequence of events on “Fight Island” in Abu Dhabi.

Sixty-six days and three wins later, Chimaev stands on the doorstep of a world title fight if he can manage to halt the undefeated streak of the third-ranked Leon Edwards next month.

It has been a remarkable run for “Borz”, but one man in his division who perhaps isn’t so impressed is two-time former title challenger Thompson.

Speaking to Australian outlet Submission Radio, “Wonderboy” said that the Chimaev hasn’t necessarily got where he’s got due to his skill, but rather because of his background – and says that his rise is heavily linked to Khabib Nurmagomedov’s exit strategy from the sport.

“Rankings is becoming a non-existent thing, it’s about the exciting fights,” Thompson said of Chimaev, who entered the UFC’s welterweight rankings this week at No. 15, despite not having beaten – or even fought – a ranked fighter yet.

“I kind of called it,” he said. “I was like, man, why are they pushing this Khamzat guy so hard. And then I was like, watch Khabib retire.”

While there is a degree of uncertainty as to Khabib’s immediate future, the Russian champion did indeed announce his retirement in the cage immediately after last month’s title defense against Justin Gaethje, and Thompson suggests that it is suspicious that, as one Russian champion steps away, another Russian-born fighter is being pushed into his place.

“They kind of did the same thing with [Darren] Till. When [Michael] Bisping retired, they needed somebody from that market to keep those fans involved, and Till was it,” Thompson explained.

“I guess the same thing with Khamzat. They knew that Khabib was gonna retire and they needed somebody from that market, and there you go. You’ve got this Khamzat guy who’s been doing work.”

While Thompson’s take is little too conspiratorially-minded for our taste, there is little denying that the UFC do attempt to identify potential stars and push them to the moon. Sometimes it works, and sometimes it does not, and one must only look towards the contrasting fortunes of fighters who have received the full promotional backing of the UFC’s PR machine.

The most obvious example is Conor McGregor, who was cherry-picked as a potential superstar following his UFC debut in Sweden in 2013 and, on the other side of that coin, Sage Northcutt could be considered a fighter who was given every opportunity to succeed in the octagon but ultimately failed to deliver.

Time will tell which side of this divide Chimaev will fall on, but our intuition tells us that it’ll be a lot closer to McGregor than it will be to Northcutt.

One thing’s for sure, it’s going to be a lot of fun finding out. 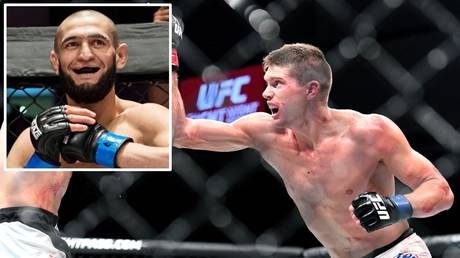