A gathering of mask-wearing activists – who appeared to be almost exclusively young women – were pictured marching on Moscow’s famous Teatralnaya Ploshchad (Theater Square), just in front of the Russian capital’s iconic Bolshoi Theater.

Showing their support for the beleaguered Dzyuba – whose bedroom antics have been the talk of the nation since footage was leaked on Saturday night – some held banners with a hashtag translating as “Everyone does it”.

Others had “not ashamed” written across the front of their masks and some supporters were seen with the slogan “I am/we are Dzyuba”.

Issuing a rallying cry for female supporters over the age of 18 to attend the meeting, the ‘First Women’s Academy’ group wrote on social media: “The Soviet Union collapsed 29 years ago, and we’re still living with the notion that ‘there was no sex in the USSR’.

“It’s time to start speaking openly about sex (and) its importance in the life of people for their health!

Some posts indicated that attendees would each be paid 1,000 rubles ($13) for their troubles.

“It’s not a meeting, it’s a protest in support of Dzyuba,” one participant was reported as saying.

“The police wanted to detain us, but we fled. Now we’re going to the Russian Football Union (headquarters),” she claimed.

While small, the meeting is indicative of the support that embattled Russian World Cup hero Dzyuba has received since the compromising video leaked online over the weekend.

The footage, in which the big forward is seen staring into a camera while pleasuring himself in bed, is believed to have been hacked from the footballer’s phone.

Dzyuba was subsequently dropped from the Russia squad for the upcoming games with Moldova, Turkey, and Serbia, with national team boss Stanislav Cherchesov explaining he wanted to “protect both the team and the player from excessive negativity and tension.”

Dzyuba did feature for club team Zenit in their Russian Premier League clash against Krasnodar on Sunday evening, but was stripped of the captain’s armband.

It looked as if his nightmare weekend would continue when he missed a first-half penalty and was subjected to obscene abuse from sections of his own fans, but bounced back in the second half to put Zenit ahead in a game which ended 3-1 to the hosts.

After the match, an emotional Dzyuba issued a message thanking fans for their support, saying “we are all sinners” but that he partly “had himself to blame” for the controversy.

The 6ft 4in target man has received notable support from Russia’s celebrity community, with socialite-turned-presidential candidate Ksenia Sobchak issuing a particularly scathing attack on Dzyuba’s detractors in which she screamed that “everyone masturbates how they want!”

There has also been widespread humor, as the ‘Dzyuba challenge’ sprung up online featuring men performing various tasks while partially clothed in bed.

Russian daytime TV gave its own take on the scandal on Monday, when Dzyuba’s bedroom strokes were the subject of debate by an assembled panel of guests.

Dzyuba, 32, will at least have the chance to avoid the spotlight on the pitch for the next couple of weeks, watching on from home as Russia play a friendly against Moldova in Chisinau on Thursday, followed by away games in Turkey and Serbia in the UEFA Nations League. 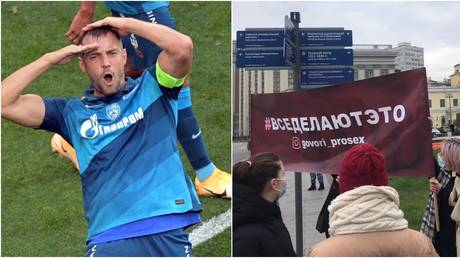