Spooked locals have admitted their shock at seeing a dinosaur-like reptile roaming freely around a golf course in Florida, where a tropical storm has provided ideal conditions for the creature to leave the water in search of food.

As hurricanes from Storm Eta closed bridges and transport routes around Naples, an unsettling clip emerged of the large alligator snaking back towards the water after taking a stroll around the 17th hole at the Valencia Golf and Country Club.

Locals are used to seeing alligators emerge from the water during freak weather conditions in the region, but the unusual size and apparent nonchalance of the beast surprised many viewers.

The club’s official Facebook account announced that the alligator was “out enjoying the tropical conditions”, although there was some skepticism that the clip had been doctored.

“I’ve seen hundreds of various sized gators…a few small ones in our community, off and on,” said a resident. “Where did this monster-sized gator come from?“

This year isn’t over yet – by December it’ll have sprouted wings & laser eyes.

The footage was shot by Tyler Stolting, a staff member at the course who saw the alligator from his golf cart.

Stolting told the Miami Herald that he had been driving in the storm at around 2pm local time when he saw the reptile, estimating it to span at least 10ft in length.

He said there were no plans to contact experts at the Florida Fish and Wildlife Conservation Commission or make attempts to apprehend the alligator. 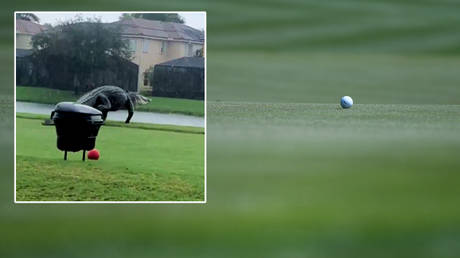 Boris Johnson and his team accused...

Paris beefs up policing amid ‘lack...