‘This takes the cake’: Nick Kyrgios goes in on Novak Djokovic after Covid-19 diagnosis & tour partying

‘This takes the cake’: Nick Kyrgios goes in on Novak Djokovic after Covid-19 diagnosis & tour partying

Djokovic announced the diagnosis of he and his wife Jelena on Tuesday, releasing a statement to social media saying that he was “extremely sorry for each individual case of infection” which may have resulted from the controversial tournament.

The Serb now becomes the fourth professional to have contracted the virus in the wake of the tour, which took place in Belgrade and Zadar, and comes after similar test results from Grigor Dimitrov, Borna Coric and Viktor Troicki.

The tour had caused a torrent of criticism online as organizers pushed forward with plans to hold matches in stadia filled with fans, while Djokovic was also slammed for video footage which appeared online in which he was seen dancing at a nightclub alongside other players.

The positive test comes after Kyrgios had publicly criticized Djokovic for hosting the tournament, and the vocal Australian was among the first professionals to react to Tuesday’s news.

Prayers up to all the players that have contracted Covid – 19. Don’t @ me for anything I’ve done that has been ‘irresponsible’ or classified as ‘stupidity’ – this takes the cake. https://t.co/lVligELgID

Others pointed out online that it is a strange sight for Kyrgios, one of the sport’s most colorful characters, was the voice of reason amid the ongoing coronavirus global health crisis.

At least Kyrgios has common sense.

Djokovic, who says that he is asymptomatic, will undertake 14 days of isolation as a result of his diagnosis. He has previously stated his hesitancy at being mandated to receive a coronavirus vaccine to take part in the tennis circuit. No vaccine for the virus has yet been discovered.

“I am no expert, but I do want to have an option to choose what’s best for my body,” he said in April. “I am keeping an open mind, and I’ll continue to research on this topic because it is important and it will affect all of us.”

Kyrgios, meanwhile, has stated his opposition to the US Open proceeding as planned with the United States remaining among the world’s biggest hotbeds for coronavirus, as well as continuing protests across the country against police brutality following the death of George Floyd.

“The ATP is trying to make the US Open go ahead,” he wrote on Twitter.

“Selfish with everything going on at the moment. Obviously COVID, but also with the riots, together we need to overcome these challenges before tennis returns in my opinion.” 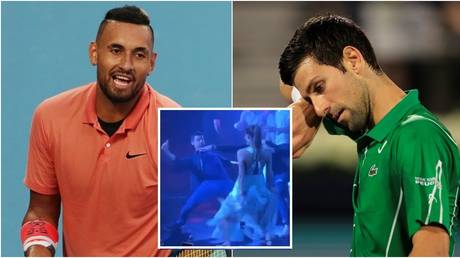 ‘Her body would inspire master...