‘This shouldn’t be allowed’: Fears as UFC’s Perry faces pregnant lover on pads after revealing she will corner him AGAIN (VIDEO)

‘This shouldn’t be allowed’: Fears as UFC’s Perry faces pregnant lover on pads after revealing she will corner him AGAIN (VIDEO)

UFC welterweight Mike Perry’s decision to let his pregnant girlfriend be his cornerman again has been met with derision by fans, less than a month after his ex-wife made explosive domestic violence allegations against the fighter.

Latory Gonzalez, Perry’s expectant partner, fired shots at a pad held by the notoriously temperamental fighter ahead of his return to action at the weekend, when he will face Tim Means at UFC 255.

New girlfriend Gonzalez helped Perry to victory as his cornerman for his win over Mickey Gall earlier this year, following the path of Danielle Nickerson, his former wife who also acted as his cornerman during their turbulent relationship.

Perry has had to answer questions about Nickerson in the build-up to his latest fight, denying her claims that he physically abused her more than once after their marriage last September, including allegedly beating her in February in an incident that led to his mother calling the police.

His corner, per his manager Abraham Kawa, will be his (pregnant) girlfriend and a long-time friend of his who isn’t a fighter.

Darren Till did not make the cut.

Good. I think I can speak for everyone when I say I’d like to keep a close eye on the well-being of that girlfriend.

Reacting to the news that Perry would be guided by Gonzalez and a non-fighting friend, one reader said: “Good. I think I can speak for everyone when I say I’d like to keep a close eye on the wellbeing of that girlfriend.”

“Imagine if she gives birth mid-fight,” one respondent said of 23-year-old Gonzalez, whose due date is January 12.

Perry used his pre-fight press conference to flatly deny Nickerson’s story, adding that there was “just nothing really to back” her version of events, which appeared to be supported by a recording of a frightened call to police made by Perry’s mother, Sabra Young.

Nickerson said that she had fled to a friend’s house and been picked up by Young after Perry had “grounded-and-pounded” her at their Florida home, causing the fighter to pursue them to Young’s home, where Young contacted the cops.

Nickerson called Perry “uncontrollable”, said she had been careful to “breathe right” around him and suggested that his defeat to Geoff Neal in December 2019 could have left him with head injuries that explained his alleged mood swings and anger issues.

“Hopefully this will be something that pushes the UFC into doing more checks on their heads and brain damage and really taking care of them physically,” she told MMA Junkie, which obtained the purported recording of Young’s 911 call.

Perry pinned her to the floor in a yard after hitting a woman at a nightclub in February, threw a chair at Nickerson and gave her hematomas on the back of her neck after becoming “tired of hitting me so much”, she alleged.

With the former professional tennis player inside her house, Young can be heard appearing to tell authorities: “My son is out in the driveway and he’s violent right now.

“I’m scared for my life and I don’t know what he’s going to do. He’s revving his engine right now.

Mike Perry putting his mask on for weigh ins pic.twitter.com/oKvD7le6as

This guy had an opportunity to begin rehabilitating his image & allowed — like his fighting career — the moment to pass him by.

“His wife is inside my house, and I’m afraid he’s going to hurt her.”

Nickerson has failed with a bid to secure a restraining order against Perry since their divorce, which came after she caught him in a strip club and organized a police escort in order to collect her belongings from their home.

She has now set up a support resource for victims of domestic violence. “I really hope history does not repeat itself for [Gonzalez] or any other girl with him – or with anyone else,” she said.

Gonzalez accused Nickerson of being fake in a series of tweets earlier this month. “The divorce is over and she is still trying to stay relevant with other things that I’m not going to mention on here,” she told a critic.

“I’m going to defend my lover until I die. I’m concerned that you’re so obsessed with our life.”

Perry added: “Get off me and Latory’s nuts. The only way I would ever hit a woman is if she put her hands on Queen Latory. Please believe I’d leave a mark, b*tch.

“My mama was just being malicious like she taught me to be. How were any of them scared for their life when I wasn’t even there? I was outside in my car leaving.”

Perry is seeking a second successive win since his defeat to Neal when he heads to Las Vegas to meet Means, who has lost four of his last seven fights. 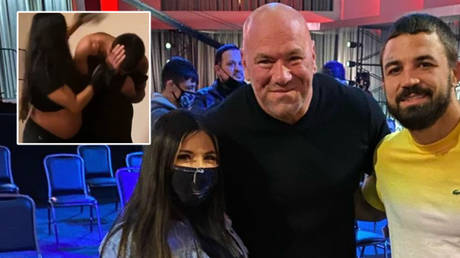