Dagestani flyweight Tagir Ulanbekov made his octagon debut at UFC Fight Island on Saturday night in Abu Dhabi, and after getting his career on the big stage off to a winning start, he dedicated his win to his former coach.

Ulanbekov defeated Brazilian Bruno Silva via unanimous decision in the opening fight of the night on Fight Island to extend his professional record to 11 wins, 1 defeat and announce his arrival in the UFC’s 125-pound division.

Then, when speaking to reporters backstage after his win, Ulanbekov revealed the pressure he put himself under as he revealed he fought for the memory of his former coach, the late Abdulmanap Nurmagomedov, and also to raise the spirits of his teamates Islam Makhachev and UFC lightweight champion Khabib Nurmagomedov as they prepare for their upcoming fights.

“I want to dedicate this victory to our coach, Abdulmanap Nurmagomedov. Rest in peace,” Ulanbekov said.

“This fight was a big responsibility for me. I had to motivate my teammates, Khabib and Islam. They are fighting on upcoming cards.”

Despite getting the win, Ulanbekov revealed he wasn’t fully satisfied with his performance.

“I didn’t fight the way I wanted,” he continued.

“Everybody says the first fight in UFC, you get too much pressure and everything, and I guess it’s true. I felt it, as well.

“I wanted to keep the fight standing, and I thought I would go through him much easier. I didn’t expect the fight to be this hard. It was one of my hardest fights to date.

“This was a long training camp. I was supposed to fight before, but I didn’t, unfortunately. I didn’t fight because Abdulmanap Nurmagomedov died. So it was just pretty much a six-month, non-stop training camp, so now I want to rest.” 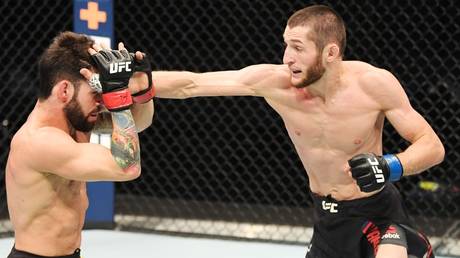