Close
Trending News
HomeSport‘This is NOT your victory!’: Evgeni Plushenko blasted by Eteri Tutberidze fans for ‘boasting’ about Trusova success

‘This is NOT your victory!’: Evgeni Plushenko blasted by Eteri Tutberidze fans for ‘boasting’ about Trusova success

‘This is NOT your victory!’: Evgeni Plushenko blasted by Eteri Tutberidze fans for ‘boasting’ about Trusova success

The heated war between two Russian figure skating camps has flared up again after the second stage of the Cup of Russia, with Eteri Tutberidze’s fans accusing Evgeni Plushenko of shamelessly taking credit for other people’s work.

The point of contention between the two figure skating schools appeared to be Russia’s quad-jumping sensation Alexandra Trusova, who parted ways with Tutberidze and joined Plushenko’s academy in May.

The 16-year-old, who won two world junior titles under Tutberidze’s guidance, confidently opened the new figure skating season in Moscow, finishing first at the second stage of the Cup of Russia.

The first female skater to throw a quad landed several ultra-C elements in her program to clinch a well-deserved victory, outscoring two of Tutberidze’s skaters, Kamila Valieva and Daria Usacheva.

Shortly after Trusova’s triumph, Plushenko made an Instagram post congratulating the skater on her win, attributing her success to his coaching team.

“All our coaching staff congratulates Sasha Trusova and Artem Kovalev on their wins. Many thanks to all who supported us. We will keep on working,” the two-time Olympic champion wrote.

Plushenko’s remarks triggered angry reactions from some fans, who insisted that he had received an accomplished skater from Tutberidze’s camp, where she had learned to land enormously difficult elements, including quads.

“Eteri this is your win, you are the best coach,” one user left a comment under Plushenko’s post.

“You may feed your ego as long as you want, but this is not your victory, Evgeni. You did nothing for Trusova’s success,” another person added.

“Trusova should have given her medal to Tutberidze after the award ceremony,” another comment read.

Trusova’s split from Tutberidze was one of the most-discussed figure skating transfers of the year. After her sensational departure another Tutberidze star, Alena Kostornaia, also joined Plushenko’s team, further deteriorating the relationship between the two coaches. 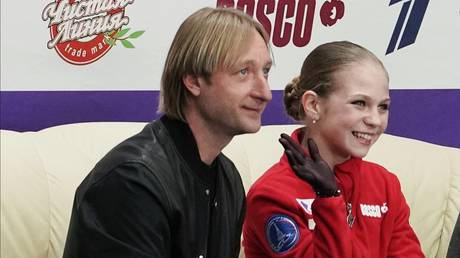