‘This is crazy’: Shocking scenes as UFC fighter struggles to stand, needs help to leave weigh-in before fight is canceled (VIDEO)

‘This is crazy’: Shocking scenes as UFC fighter struggles to stand, needs help to leave weigh-in before fight is canceled (VIDEO)

The UFC flyweight clash between Ryan Benoit and Zarrukh Adashev has been canceled after Benoit struggled to stand on his feet at the scales during the weigh in, shocking fans and experts as he clearly struggled with a weight cut.

Benoit and Adashev were scheduled to meet on the UFC Apex in Las Vegas on Saturday.

As is customary the day before, the fighters had to prove they could make the 125lb weight limit.

After being escorted off the scales after his first attempt, commentator Jon announced that Benoit was being attended to by doctors, and it wasn’t clear whether he would have another crack.

Ryan Benoit (@BabyfaceBenoit) unable to stand long enough to get weighed in. Off to see the doctor #UFCVegas26 pic.twitter.com/61mZpGqsG8

Those suspicions were answered just moments later, when Benoit returned and tried again.

Once more, he needed the help of his coaches just stand up. This time round, though, officials were able to get a reading that showed him four pounds over the flyweight limit.

Adashev, who made weight, revealed that the scrap was off while offering his best wishes to Benoit.

What are we doing? This is crazy. https://t.co/4Kuj5SXyvr

Wtf!?!? This is unacceptable! This guys health is clearly I jeopardy. If he can’t even step on a scale without assistance hows he gonna be cleared to fight in a combat sport. This is an embarrassment!°

“My fight is off against Benoit [because] he couldn’t make weight and couldn’t stand at [the] weight in,” the Russian said on Instagram.

“It’s part of our job. [I] wish my opponent a speedy recovery. Get well soon brother, Baby Face Benoit. “I hope to see you soon in the cage. Thanks, everyone, for your support.”

Opinion was split on the developments across fans on social media. “It’s a choice,” suggested ESPN pundit Ariel Helwani, who was echoed by others suggesting that Benoit should move up in weight to avoid similarly disturbing difficulties if he is struggling to make the flyweight limit.

This should be the #1 concern for Uncle Dana. What’s it going to take to make some changes? Someone die? Adding a Cruiserweight division make so much sense

Some called the debacle “absurd”, and even predicted that it could lead to deaths.

“This should be the number one concern for Uncle Dana [White, UFC  president],” argued one. “What’s it going to take to make some changes? Someone die?”

This is the second similar incident in a matter of weeks, with the UFC and its fighters appearing to tempt fate when it comes to the health of individuals.

In March, former Invicta FC champion Julija Stoliarenko fainted on the scales when readying herself to take on Julia Avila at UFC Vegas 22, apologizing to her foe afterwards.

“I want to explain what happened at the weigh-in,” the 27-year-old said.

“The problem wasn’t weight loss. In fact, it was one of the lightest weight races in my career.”

“The kilograms went away quickly. The problem was, I put on the right weight too early.

“A lot of time passed between this moment and the weighing, and my body was already at the limit of dehydration, so that was the point.” 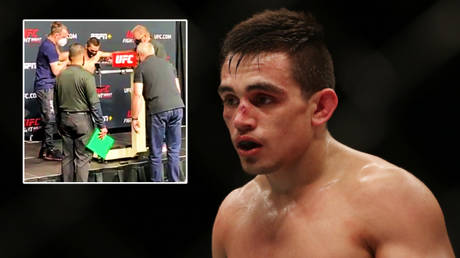