Sovre was spotted collaring Haaland in the tunnel for his signature on Tuesday night at the Etihad Stadium, after City had beaten the visitors 2-1 in their quarter-final first leg.

The unusual scenes prompted some – including former City defender Joleon Lescott in the BT Sport studio – to label Sovre “childish” for the step.

The linesman asked for Haaland’s autograph after the game vs Man City 🤣🙌 pic.twitter.com/dpWF9Fp7y0

However, it has now been revealed that the official sought out the 20-year-old superstar to sign yellow and red cards from the match so that an autism charity could auction them off in his homeland.

Romanian news outlet Gazeta Sporturilor reports that Sovre has been involved with the charity, S.O.S. Autism Bihor, for more than five years and regularly provides mementos for the center, which helps young adults.

“That autograph is for a noble cause,” explained charity official Simona Zlibut, who is a childhood friend of the football official.

“Maybe the world doesn’t know, but Tavi is directly involved in supporting this association, through which this single accredited center for adults with severe forms of autism in Bihor operates.

“There’s only five in the whole country. I have no words to talk about Tavi Sovre because he has helped us a lot all these years!”

The two cards with Haaland’s signature will be auctioned at an annual gala where there will be other donations, the outlet reported.

After the news of the official’s real motives appeared, fans were quick to praise him.

“That’s class, and even if that wasn’t his reasoning, I couldn’t care less as long as he did his job for the 90 minutes,” wrote one fan on Twitter.

“Really embarrassing for those who got triggered by the events,” wrote another, referring the criticism directed towards Sovre from some quarters.

One man who didn’t have a problem with the incident in the first place was City boss Pep Guardiola.

When asked about it after the game, the Spaniard replied: “Maybe he’s a fan of Haaland, so why not?”

Pep Guardiola says he has no problem with the assistant referee asking Borussia Dortmund striker Erling Haaland for an autograph pic.twitter.com/aJ9CiEy654

“Maybe it was for his son and daughter. I’ve never seen it before, but they did a good job.

“The referees were brilliant, the game was not a problem.”

Haaland is one of football’s hottest young properties, with a host of European giants scrambling for the prolific forward’s signature as he weighs up a potential departure from Dortmund this summer.

Haaland’s father, former professional footballer Alf-Inge Haaland, and his agent Mino Raiola were spotted last week in Spain where they met officials from Barcelona and Real Madrid over a potential move.

Tuesday’s opponents City are also said to be keen on luring the star to England, although any buyer will likely need to fork out well over €100 million for Dortmund to part with their prize asset.

Given Haaland’s status as football’s brightest young think, many will hope that the cards he signed for Sovre will fetch a handsome sum for a good cause. 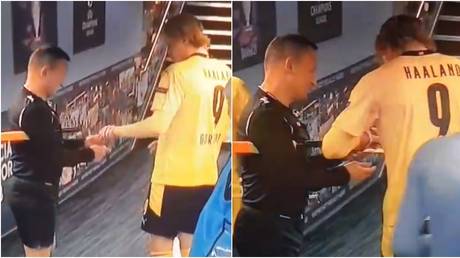