Close
Trending News
HomeSport‘This is America… I don’t give a sh*t’: Trump-supporting UFC boss Dana White blasts critics as he prepares to speak at RNC

‘This is America… I don’t give a sh*t’: Trump-supporting UFC boss Dana White blasts critics as he prepares to speak at RNC

‘This is America… I don’t give a sh*t’: Trump-supporting UFC boss Dana White blasts critics as he prepares to speak at RNC

Trump-supporting UFC chief Dana White has said he “doesn’t give a sh*t” about critics as he prepares to back the US president in a speech at the Republican National Convention this week.

White is an avid support of Donald Trump and spoke at the RNC four years ago ahead of Trump’s eventual election to the White House.

This time around, White is ready to go into battle again for his friend when he speaks at this year’s convention on Thursday.

The UFC boss was dismissive of anyone who takes issue with him nailing his political colors so firmly to the mast.

“Listen, this is America. Everybody has their own opinions and their own choices,” White said on Tuesday, MMA Junkie reported.

“I know that sometimes people go after you because of whatever, but everybody knows me. Everybody knows what I’m about, and you know.”

White is setting off for Washington on Wednesday, but remained cagey over what the contents of his speech would be, saying: “You’ll have to tune in Thursday to find out. I’ll let it speak for itself.”

In his 2016 speech campaigning for Trump, White focused on the unstinting support the US billionaire had provided for the UFC during its early days, hailing him as among the first to recognize the potential of what is now the world’s main MMA promotion.

👀 UFC President Dana White will be speaking at the Republican National Convention this Thursday!

Take a look at his previous speech supporting Donald Trump back in 2016#RNC pic.twitter.com/HSvoNgrCiQ

Four years later and White, 51, remains unabashed in his support for Trump as he takes on Democrat candidate Joe Biden in November’s elections.

“I don’t give a sh*t. I don’t care what people think of me or what they think,” said White when asked about outside perceptions of his full-throated support for Trump.

“The people that know me know who I am and know what I’m about.

“Other than that, I (couldn’t) care less. There’s tons of guys that hate Trump, whether it’s celebrities or whatever, and I’m cool with all of them. We’re all cool.

White also praised Trump earlier this year when he appeared alongside the US leader at a rally in Colorado in February.

White isn’t the only high-profile UFC figure to signal his support for Trump in the run-up to November’s showdown with Biden.

Popular welterweight Jorge Masvidal has also given qualified backing to the US leader, with the Cuban-American fighter saying in July that “[Trump’s] actually helping out my people. And I’m supposed to not give credit for that?” 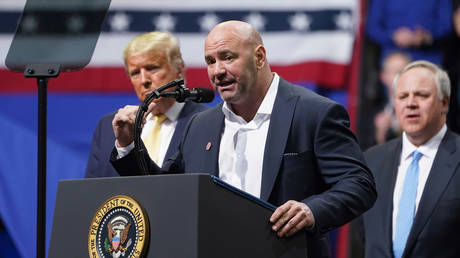