Ireland has a long history of success in fighting but Irish boxer and current trainer of Petr Yan, John Hutchinson, says that the Russian standout is even more impressive on the feet than his country’s most notorious export.

Yan will attempt to become Russia’s latest UFC champion late on Saturday night when he takes on UFC icon Jose Aldo for the vacant bantamweight title and according to Hutchinson, the result will be every bit as emphatic as when his countryman Conor McGregor dethroned the Brazilian to seize the featherweight championship all those years ago.

And these aren’t empty words: Hutchinson has been central to Yan’s effortless style of striking for several fights now. It was a relationship which began in the training rooms of Tiger Muay Thai in Thailand, their language barriers bridged by the universal dialect of boxing.

“We didn’t need any language, he’s so smart,” Hutchinson told RT Sport in Abu Dhabi. “His speed, his timing… he actually had that amateur boxing side.

“He wasn’t punching as hard as he could, [so] I gave him a few pointers. I just knew from day one. I actually wrote it down in my notebook, I wrote ‘Petr Yan will be a world champion’. I actually showed him in the room to remind how far he’s come today.”

Hutchinson called time on his his own professional career a few years ago, retiring with a record of 11-2-3 but the one-time Irish light middleweight title challenger has since turned his attention to training a new generation of fighters – and as soon as he saw Yan’s first session he new he had discovered a gem.

“[I noticed his] fight IQ straight away,” he continued. “He can read a fighter. His determination, his attitude, his relentless work ethic. He’s a nightmare for anybody in that cage. Also, I’ll say it again – he’s the most powerful bantamweight out there. If he lands one on anybody’s chin clean, they’re gone.

“Petr’s mentality is to be the best at everything he does. For example, we set up a new drill in the gym – like a jumper – you go from the back and you time it. I think the first day he set the record, it was like 52 jumps. And somebody came and beat it. And the next day Petr just went over his record by 14. Wrestling, running, whatever he does he’s got to be number one.”

Much like Hutchinson’s compatriot, Conor McGregor, Yan will have to find a way past one of the sport’s most enduring legends if he is to claim his first UFC title but rather than dismiss the blueprint McGregor briefly displayed against Aldo in December 2015, Hutchinson says they can learn from it. Improve it, even.

“Aldo is waiting for the pressure and waiting for Petr to come. Petr will come, but smart and controlled, back to his amateur boxing days, he’s on his toes,” Hutchinson explained of Yan’s strategy.

“When McGregor fights he’s on his toes, a little half-step. It’s going to be a vital key in this fight.

“I said this to Petr at the start, when I wrote him a note, the note that I showed him. I said ‘This guy is a better boxer than McGregor’. They’re on a similar path, they’re very smart guys, they use their boxing. Petr’s got that burn.

“After his fight everyone is going to know Petr Yan. Styles make fights, and this fight is made for Petr.” 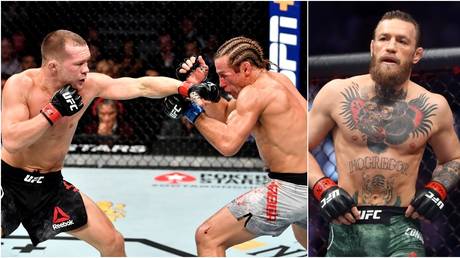 Over 60 percent of travelers plan...