Things can only get better: F1 boss says Russian rookie Mazepin ‘is trying too hard’ after latest disasterclass

Things can only get better: F1 boss says Russian rookie Mazepin ‘is trying too hard’ after latest disasterclass

Russian Formula 1 driver Nikita Mazepin, 22, must “reduce” his accidents according to the boss of his Haas F1 team, Gunther Steiner, after the novice driver spun out TWICE during Friday’s first practice at Imola.

Steiner’s comments come after Mazepin spun out early in the FP1 session on Friday and later crashed into a barrier near the pit lane towards the end of the session, placing the young driver very much in the focus once again after he also crashed out early during his debut Formula 1 race in Bahrain in late March.

His erratic early showings led to some fans branding Mazepin as a “danger to himself and others“, prompting concerns that he isn’t quite up to speed in the high-stakes world of F1 where a mistake can cost a driver a whole lot more than a place on the podium.

But Steiner, who generated significant headlines when he paired the controversial Mazepin with another Formula 1 novice, Mick Schumacher (son of seven-time champ Michael), says that his young driver will quickly learn but also admitted that the error-prone driver must show exactly why he is so highly thought of by Haas.

“Learning is painful, but at some stage that will hopefully stop,” said Steiner.

“I said to him: ‘You need to keep your head high. These things happen and obviously in the moment he’s the beat-up boy, you know? Everybody beats up on him. That makes it tougher.

“In the end you come out on the better side – but you just need to keep your head up, focus on your next race and keep on going.

“At some stage [the accidents] need to be reduced but he is trying very hard for that and I guess sometimes he is trying too hard. He needs to find that limit. But that’s for him to find, not us. We can help him in doing that.”

Mazepin had previously drawn the ire of F1 fans, and presumably his bosses, when he generated numerous tabloid headlines after a video emerged of his appearing to touch a woman inappropriately in the backseat of a car last year.

He was invited into F1 after finishing in fifth position in Formula 2 last year, four places behind champion Mick Schumacher. His father, Russian billionaire Dmitry Mazepin, is among the Haas team’s financial backers.

But judging by his own comments, the younger Mazepin isn’t taking his early errors to heart.

“I learned a lot about the car,” he said Friday after his two accidents. “I made another step forward with the team in terms of understanding what car I want to drive.

“P1 was a very good lap time. A mistake here and there, you drop a wheel [into the gravel] and there is no coming back. So far it is quite difficult to keep it on track but I am doing my best.

“I am definitely not leaving anything on the table out there,” he said. “That is the nature of my life. I try and do something to 100%. I wouldn’t want to go to sleep and think I had left some time there.

“But then there is a balance which I haven’t mastered yet. But I still have some time and I am totally on the same page with my team boss.“

Mazepin will start this weekend’s Grand Prix at Imola 19th on the grid, after another disappointing qualifying session on Saturday.

Mercedes king Lewis Hamilton pipped Sergio Perez of Red Bull to pole, with the Brit starting at the front of the grid for the 99th time in his stellar career. 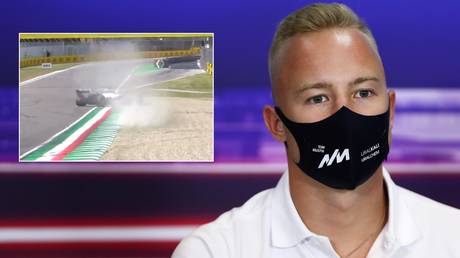 ‘No jewelry or watches left’: Wife...