‘They’re not allowed to knock each other out?’: UFC boss Dana White left stunned by rules of upcoming Tyson-Jones Jr fight (VIDEO)

‘They’re not allowed to knock each other out?’: UFC boss Dana White left stunned by rules of upcoming Tyson-Jones Jr fight (VIDEO)

UFC president Dana White was flabbergasted when he he was informed by a member of the media that this weekend’s exhibition match between Mike Tyson and Roy Jones has a strict ‘no knockouts’ rule.

The two ring icons are set to meet in Los Angeles this coming Saturday in a high-stakes exhibition match which will pit two of the sport’s most dominant punchers of their generation against one another.

However, the fight’s distinctly middle-aged feel (Tyson is 55, Jones 51) has led to organizers instituting a series of rules designed, it seems, to prevent any type of real fight from breaking out, with California State Athletic Commission executive director saying in July that the safety of the two boxing legends is paramount.

“We can’t mislead the public as to this is some kind of real fight,” Foster said. “They can get into it a little bit, but I don’t want people to get hurt. They know the deal.”

One such safeguard is understood to be a ‘no knockouts’ rule, with the two boxers instead being asked to perform an exhibition of their skills through eight rounds – which comes in harsh contrast to the series of raw and concussive training videos released by Tyson throughout the summer which sparked this fight in the first place.

#UFC president @DanaWhite was TOTALLY out of the loop on the rules of upcoming #TysonJones fight next week. 😂

And UFC boss White, a close friend of Tyson’s, isn’t sure that the California State Athletic Commission’s ‘no knockouts’ decree is realistic – particularly in a fight involving ‘Iron Mike’ – when pressed on the matter by the media following Saturday’s UFC 255 event in Las Vegas.

White, who was only made aware of the rules of the fight when speaking with the press, was incredulous that organizers would take the fight in this direction.

“There’s no knockouts?” he asked before breaking out into laughter. “They’re not allowed to knock each other out? How do you enforce that?

“I’d like to bet that doesn’t happen. Can you bet on that? I don’t even know what to say to that.”

Tyson, though, has never been one to follow too many rules (this is the man who bit Evander Holyfield’s ear off in the ring, remember) and outlined to ESPN that he intends to march forward and put his opponent in uncomfortable situations from the off – regardless of instructions from the commission. 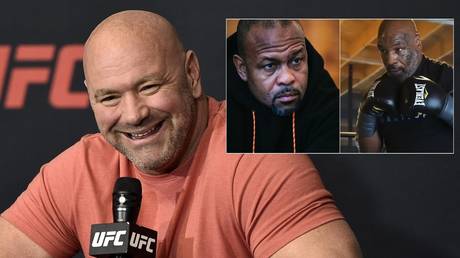