Serie A side Torino have received a confused response on social media after posting a photo of Italy striker Andrea Belotti standing over Nicolas Nkoulou while the Cameroon defender took a knee as part of a goal celebration.

Nkoulou repeated the move made by many footballers during the current wave of Black Lives Matter protests after opening scoring for hosts Torino against Parma on Saturday, taking the symbolic knee after celebrating with teammates, including Belotti.

As the other Torino players returned to their own half, Belotti inadvertently stood over Nkoulou while he knelt, waiting for him to stand before embracing him again.

Torino supported the high-profile campaign by posting photos of Nkoulou kneeling alone and the pair hugging to their following of almost 275,000 on Instagram, but drew criticism for their arguably less well-advised choice of picture on Twitter, accompanied by the Black Lives Matter hashtag.

🎙️| Nkoulou: “When I scored I immediately thought of my brother Floyd”#SFT pic.twitter.com/TP9rRAh1Vg

So I just went back and watched it. It’s a weird scene tbh. I’m really trying to check my preconceived notions here. N’Koulou celebrates with everyone. He takes a knee, everyone walks away but Belotti who waits directly in front of him and then celebrates again once he stands. pic.twitter.com/JCSc6hOMim

Nkolou reposted the photo on his Instagram story without comment in a move that appeared to suggest he endorsed the solidarity the photo could have been interpreted as showing.

Earlier in the month, the experienced international reposted a photo showing the club’s squad taking a knee together on a pitch for a group shot before the season resumed in Italy, captioned: “Against racism. Everytime, everywhere.”

When asked about the gesture, he said he had been thinking about George Floyd, whose death at the hands of police brutality in the US sparked public outrage.

“When I scored, I immediately thought of my brother Floyd, which is important to me.”

I’m not putting “agenda” beyond him as this is Italy after all, but I really think this was just stupidity.

Italy has come under scrutiny for numerous incidents of racial abuse in stadiums this season, as well as an ill-conceived newspaper campaign which used artworks of primates and the headline “Black Friday” alongside photos of black footballers in a move that had been intended as a move against racism.

One observer said Torino’s media team “should have been more careful,” while another pointed out: “I’m not putting ‘agenda’ beyond [Torino] as this is Italy after all, but I really think this was just stupidity.”

Belotti subsequently missed a penalty as Parma hit back to earn a 1-1 draw that leaves Torino only three points above the relegation zone.

“We started the match well,” said Nkolou, who has made almost 100 appearances for the club since signing in 2017.

“We are sorry because it was a game that we could have won, but it remains an important point.” 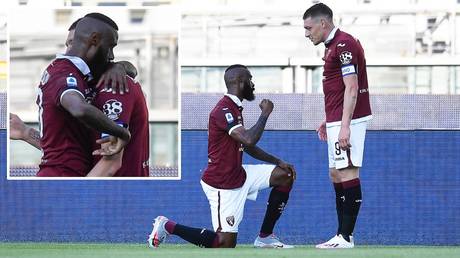 'Gladly welcome you to a beat...