‘They got what they deserved’: Matchwinner Maupay MOCKS Arsenal as Brighton score late to hand Gunners ANOTHER loss (VIDEO)

‘They got what they deserved’: Matchwinner Maupay MOCKS Arsenal as Brighton score late to hand Gunners ANOTHER loss (VIDEO)

Arsenal’s ambitions of qualifying for Europe this season took a major dent as they spurned a second-half lead provided by Nicolas Pepe’s spectacular finish to succumb to a second straight defeat since the Premier League’s restart.

Neal Maupay scored five minutes into added time as the relegation-threatened hosts completed a win double over the London side by repeating their 2-1 win at the Emirates Stadium in December, when the Frenchman also scored a late winner.

The Seagulls’ top scorer linked up beautifully with Argentina striker Alexis Mac Allister to break Arsenal hearts once again as he finished smartly from an acute angle to seal a stunning comeback and send Mikel Arteta’s men crashing to their second defeat in four days.

The Gunners looked on course to put their 3-0 midweek hiding at Manchester City behind them when Ivory Coast winger Pepe gave them a 68th-minute lead with an unstoppable strike into the far roof of the net from the right-hand side of the Albion penalty area.

The $87 million summer signing’s moment of class finally broke the resistance of the home side, who had not won a league match in 2020 and were saved on several occasions by Australia goalkeeper Mat Ryan.

Having had more openings and possession, Arsenal missed the opportunity to close the six-point gap on fifth-placed Manchester United by allowing defender Lewis Dunk to steal in for a scrambled equalizer seven minutes later.

Arsenal coach Mikel Arteta cut an unimpressed figure at the end, admitting his young side had failed to “compete” and capitalize on their ample chances.

Maupay revealed he had apologized to Arteta for a collision that forced goalkeeper Bern Leno off on a stretcher in the first half and accused the visiting stars of having attitude problems.

“They were talking a lot. They got what they deserved.” 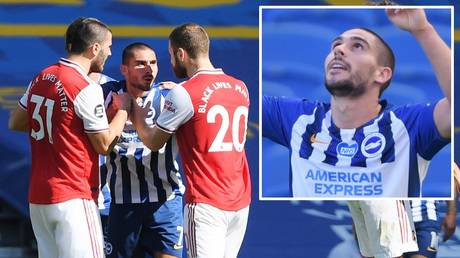 End of an era? Dana White admits U...